Wilson and Shea on Illuminatus! in 1976 article 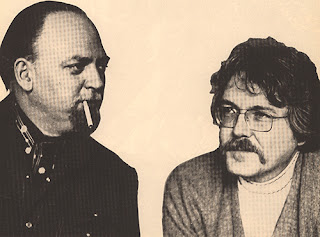 Martin Wagner's latest discovery is a gem: A short but insightful article/interview on Illuminatus! published in 1976 in Bookletter and written by Bill Henkin.

Even the usual description of the authors one would expect for such a piece is well done:

"Neither of them looks dangerous. At forty-two, they’re both a bit portly. Robert Shea, about six feet, is modishly attired like a successful magazine editor—which he is, at Playboy. Robert Anton Wilson, some inches shorter and with a slight Vandyke, resembles nothing so much as an arcane medieval scholar without his robes. He is the author of Sex and Drugs: A Journey Beyond Limits, Playboy’s Book of Forbidden Words, The Book of the Breast (all Playboy Press), The Sex Magicians (Jaundice Press), and the forth-coming Prometheus Rising: A Magick Manual for the Space Age. He’s an initiated witch in the New Reformed Orthodox Order of the Golden Dawn, and a voodoo priest in the Socicdad Magico de Chango. They look fine to invite home to dinner, but they’ve just unleashed a holy terror on the world, intended to rend the fabric of reality as it is generally perceived."