The importance of 'Prometheus Rising' to RAW 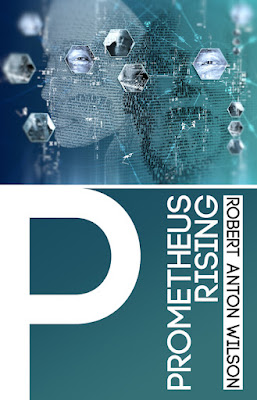 In light of the fact we've been spending quite a bit of time in an online Prometheus Rising reading group, I wanted to note something Eric Wagner pointed out in the recently-published new Hilaritas Press edition of Wilhelm Reich In Hell.

There's a lot of other stuff in the new second forward Eric wrote for Wilhelm Reich In Hell, so perhaps I can quote a couple of sentences: "I find it interesting that in the introduction to this book, Wilson directs the reader to Prometheus Rising for anyone interested in transforming themselves or lessening character armoring. He similarly points the reader to Prometheus Rising in his 1987 introduction to Sex and Drugs and in his introduction to Christopher Hyatt's Undoing Yourself with Energizing Meditation and in a number of other places. Wilson clearly privileges Prometheus Rising among his writings as a place where he clearly sets forth a number of exercises for self-transformation."

Thank you for sharing this. One of the last exercises in Prometheus Rising asks the reader to imagine living three hundred years. I wonder how Bob Wilson's reputation will fair over the next three centuries. I suspect I will continue wrestling with this book and its exercises frequently over the centuries if I live that long.

From a 2004 interview conducted by James Nye:

NYE: Regarding Illuminatus!, do you have any advice for people coming to it fresh, who have never read your work before?

RAW: Read something else first. I'm very fond of Illuminatus! I like it a lot, but over the years I realize how hard it is for newcomers. Read an easier one of my books first. Persuade yourself I'm worth reading, and then plunge into Illuminatus! ... I'm not discouraging people from reading it, I mean, if you do find it hard, read something easier by me. Try Schrödinger's Cat, for instance. Or better still, try Prometheus Rising. Nobody has any trouble with that.

Readers may want to read this High Times article from Reich’s son Peter on growing up with WR. Interesting.
https://hightimes.com/culture/from-the-archives-my-father-wilhelm-reich-vs-the-u-f-o-s-1976/