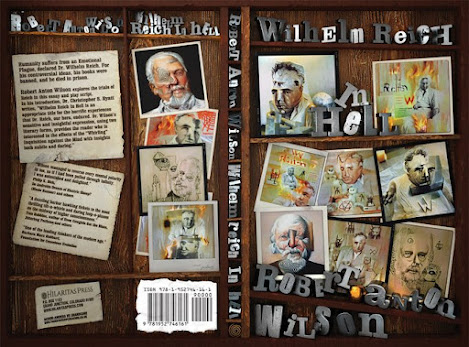 The new Hilaritas Press edition of Robert Anton Wilson's Wilhelm Reich in Hell has been released.

The main text of the book is essentially in two parts. (As per usual, the new Hilaritas edition was quietly released before the official announcement, and I bought it and was able to finish reading it last night). There is a long essay by RAW on Reich and on suppression of free thought, full of sharp observations, and then the text of a play, "Wilhelm Reich in Hell," which has been staged in a number of cities.

Read Rasa's official announcement for an additional piece by Eric Wagner and for more information about the book and more news from Hilaritas Press, including a soon-to-be-released new audiobook of Cosmic Trigger 3.

Hilaritas has now released 16 of 20 planned RAW reprints/new editions; see the home page for details.  New editions of The Walls Came Tumbling Down, TSOG: The Thing That Ate the Constitution and Reality is What You Can Get Away With are likely in the not-too-distant future, and Chaos and Beyond also is over the horizon.

Thank you for your kind words. I really enjoyed rereading the book last December to get ready to write my new piece.

Pretty exciting day for me - I've not read this one before. I think I first came across it early on in my RAW studies, and wasn't very interested in the script. Having since read some of Reich's work, I'm now interested and excited. Knowing RAW's work much better now, I suddenly appreciate the script very much. It seems like a nice change of pace.

@Eric Wagner: In case you weren't being facetious in your wondering about what Johnny Depp has been up to recently, please do yourself a favor and do notcheck it out. I realize that my saying this might make you curious and willing to check it out, but the news won't be very good, I'm afraid.
Regardless, thank you for what you wrote for the newsletter.

Most welcome, Spookah. Yes, I had heard that Mr. Depp had his day in court.