Review: 'Inventor of the Future,' the Bucky Fuller biography 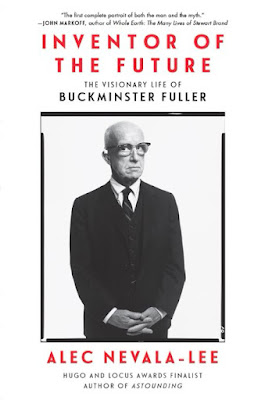 Alec Nevala-Lee's new book about Buckminster Fuller, Inventor of the Future: The Visionary Life of Buckminster Fuller, is a big, carefully researched account that seems likely to become the definitive biography of Fuller.
Nevala-Lee's previously best-known nonfiction work was Astounding, a book about John Campbell, Isaac Asimov, Robert Heinlein and L. Ron Hubbard and the golden age of science fiction, at least in the eyes of contemporary fans. It's a great book which every science fiction fan should read, but perhaps it was not a topic that would provide a best seller. Given Fuller's fame, this excellent new biography, out August 2, seems likely to win Nevala-Lee many new fans.
While this book was a labor of love for Nevala-Lee -- he discovered Fuller as a teenager and became a lifelong fan, he explains in the book's acknowledgements section -- it is hardly an uncritical hagiography. Nevala-Lee writes in the Prologue that while there have been many books about Fuller, many have been "riddled with errors." It is Nevala-Lee's intention to write "a comprehensive biography that covered  his full career using the best available sources" and to give Fuller "exhaustive, respectful but unsentimental treatment."
As I waded into the book (more than 600 pages), it quickly became clear why many previous books about Fuller have many errors; it's because they relied largely on Fuller, and Fuller, to put it charitably, was an unreliable narrator. In fact, he often made false statements, about himself and his inventions and ideas, and even allowing for the fact that many people tend to misremember elements of their own lives, it seems that Fuller was not a particularly honest person. So it's not true, for example, that Fuller stopped speaking for months after having his transformative experience in 1927 on the shore of Lake Michigan.
In fact, a big surprise for me as I got into the book was discovering that I just did not like Fuller very much. He had a bad habit, for example, of appropriating the ideas of other people and claiming them as his own. (Nevala-Lee writes that Fuller made good use of groups of college students, and "he carried the discoveries of each group of students to the next school on his list, burnishing his image as a genius by assimilating the work of many others. When credited to him alone, it made him seem staggeringly versatile ... ") Great men who make things happen are often not very pleasant people -- Steve Jobs and Elon Musk are two familiar recent examples -- and Fuller seems to fit into that mold.
But Nevala-Lee also shows how influential Fuller was. The book's Prologue, which is particularly good, gets the biography off to a fast start by describing Fuller's visit to the campus of Apple and showing how Fuller was a particular inspiration to many important Silicon Valley figures, including Jobs.
There is comprehensive coverage of Fuller's geodesic domes and ventures into architecture, his Dymaxion car and other inventions, and his often amusing and interesting interactions with other famous people. He collaborated with the artist Isamu Noguchi, was rather good friends with John Cage, and had encounters with figures including L. Ron Hubbard, Ezra Pound, Arthur C. Clarke and William Burroughs.
Fuller's interactions with Robert Anton Wilson are not described, although Wilson's interview with Fuller for High Times magazine is used as a source and mentioned in the notes. Fuller's influence on Wilson would be hard to overstate -- Fuller is cited in Wilson's writings many times. Fuller pops up in cameo appearances in Illuminatus! and is frequently cited by name in that work. Many Wilson fans will want to read Nevala-Lee's book to learn more about a key influence on RAW.
Nevala-Lee's book ends strongly with an epilogue on how Fuller's ideas inspired important breakthroughs in chemistry. And the "Acknowledgements" at the back of the book should not be skipped, as it includes Nevala-Lee's recommendations on which of Fuller's books to read to find out more about Fuller's ideas.
on June 19, 2022

Thanks for the great review! I do wish that I had managed to talk more about RAW (I'm a big fan) but I had to cut a lot interesting material from the final draft. Hopefully it'll end up published in some form one of these days.

Writers’ origin stories are often not entirely nonfiction: Heinlein whimsically deciding to enter an sf story contest, Burgess writing a half dozen novels because he had a brain tumor…

Great review, makes me want to read the book. I have less trouble with fictionalizing elements of one's biography for allegorical/didactic reasons - there's precedent for that with Gurdjieff's Meetings with Remarkable Men and Leary's Flashbacks - than taking credit for ideas not your own, if indeed that occurred with Fuller. I've heard similar criticisms before but never looked into it. If Fuller's intent included making a folk hero of himself, then it seems he did a good job.

An earlier biography related an account of Fuller meeting a few times with Gurdjieff in a popular bar/speakeasy on 8th St. in NY sometime in the 1920s. I wonder about the veracity of that info, it didn't seem to come from Fuller. The account said that Fuller got turned off with synchophants treating Gurdjieff like a guru and that he wouldn't want that for himself.

He did indeed encounter Gurdjieff, although my advance reading copy lacks an index and I can't quickly look it up in the book.