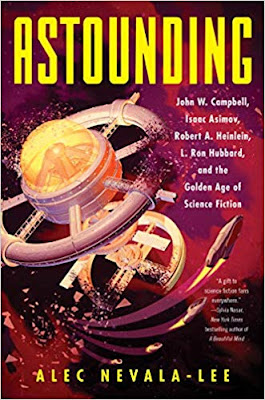 Alec Nevala-Lee's Astounding is pretty exciting for a science fiction fan, but Robert Anton Wilson fans might be interested, too.

I hope you enjoy synchronicities, because I ran into one this morning after I got out of bed.

When Robert Anton Wilson was interviewed by New Libertarian Notes, he talked about his love for the work of Robert Anson Heinlein: "Heinlein has been an idol to me for more than 20 years. He can do no wrong, no matter how much he loves wars and hates pacifists. (I'm the kind of anarchist whose chief objection to the State is that it kills so many people. Government is the epitome of the deathist philosophy I reject.)" Wilson was well aware of the coincidence of their middle names; in The Universe Next Door, which features alternate universes, Wilson's byline is given variously as "Robert Anton Wilson" and "Robert Anson Wilson" and Heinlein's The Man Who Sold the Moon is (approvingly) mentioned in the text.

I have been reading Astounding: John W. Campbell, Isaac Asimov, Robert A. Heinlein, L. Ron Hubbard, and the Golden Age of Science Fiction by Alec Nevala-Lee. For an old science fiction fan like me, it's kind of like reading the backstory behind classic anthologies such as The Science Fiction Hall of Fame Vol. 1, edited by Robert Silverberg. And as you can tell from the title, it's not just about John Campbell Jr. and Astounding Science Fiction magazine -- the reader learns a lot about Asimov, Heinlein and Hubbard. ("Jack Parsons" appears many times in the index, but I haven't gotten to that part yet.) (When I was in high school, Asimov probably was my favorite author. I didn't know about his hobby of grabbing and manhandling every woman within reach at SF conventions until many years later.)

Yesterday, I read chapter 5, "The Analytical Laboratory 1938-1940," and I noticed several observations about Heinlein, early in his SF writing career, which might interest Wilson fans. Heinlein became interested in General Semantics and Alfred Korzyzski, Nevala-Lee writes, explaining that Korzybski is best known for his aphorism, "The map is not the territory." An early unpublished novel, For Us, the Living, was structured "around his interest in a proposal for a universal basic income." An early novella, "If This Goes On--" featured a character warning that Americans need to "wake up" from their conditioning:  "The American people have been conditioned from the cradle by the cleverest and most thorough psychotechnicians to believe in and trust the dictatorship which rules them ... " (pages 110-114)

But getting back to what happened when I got out of bed. I had made up my mind to write about Astounding last night. When I got up and went through my morning ritual of moderating comments on the blog, I was "astounded" to see that  "Alec" had left a comment to yesterday's post. He wrote:

Glad to hear that you're enjoying Astounding!. I'm not sure if you knew this, but I'm a big RAW fan:

For a while, I thought about writing his biography, but it sounds like someone else beat me to it—and I can't wait to see the result.

Well, I didn't know that. Mr. Nevala-Lee's blog posting deserves a separate posting here, but you can go read it now.

Addendum: On Twitter, Mr. Nevala-Lee writes, "Wilson doesn't turn up in the book itself, but I often thought about him as I was writing it. (Among other things, the epigraph from Crowley in Chapter 10 was taken straight from Cosmic Trigger.)"

As you probably know, RAH and RAW are my two great influences. They in turn learned from Korzybski. I think they both learned that the English language is not an adequate tool with which to pick up reality, but RAH thought we should build a better one, and RAW decided that there couldn’t be one. I fear RAW won that round. They also were both influenced by Social Credit, which makes a lot of sense to me.

On p.590 of the same book: RAH on Korzybski and Whorf.

I was not surprised that RAH wasn't impressed with LSD and Leary. See p.277.

Re: Neurogeography and moves ever-westward/maverick genes and migration theme in RAW: RAH and his wife lived in Colorado Springs (probably one of the most "right wing" areas in the American West). They put their house up for sale and began looking westward: Widbey Island in Pugent Sound and Port Angeles, WA, then a town south of Portland, then Fort Bragg, CA, and Novato, just north of San Francisco. They settled in Watsonville, CA (where RAW's son lives to this day?), on the outskirts, where RAH seems to have built their house in the redwoods, December 1965. It's a fairly short drive from Watsonville to Santa Cruz/Capitola.

RAW also lived in the Fort Bragg area at one point, didn't he?

It sounds as if RAW and RAW both lived in California at the same time for many years. Obviously it's a big state, but RAW and Philip K. Dick finally met. Did RAW ever meet Heinlein, or make any attempt to do so?

I have never seen anything about RAW mentioning he met Heinlein.

However, while living in Ireland he took a gig with a magazine as an interviewer of writers, and he spent time with Colin Wilson at his house in Cornwall. He interviewed Doris Lessing and Rupert Sheldrake and I've never seen those interviews. Also: who knew he met those people? It could be that RAW met so many people as a speaker/interviewer/conference-goer that he was the opposite of the "name-dropper" writer.

I read a biography of Frank Zappa a few years ago. Zappa was a big admirer of Igor Stravinsky but apparently Zappa never tried to meet him, in spite of the fact that both of them lived in California.

I do know that there are people who knew both Heinlein and RAW, e.g. David Hartwell, who edited them both, and J. Neil Schulman.