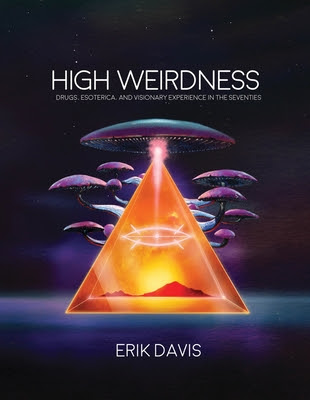 The SFRA Review, an open access journal of the Science Fiction Research Association freely available on the Internet, has in its new issue a review of High Weirdness: Drugs, Esoterica and Visionary Experience in the Seventies by Erik Davis, a book that came out in 2019 which focused on Terence McKenna, Robert Anton Wilson and Philip K. Dick.

The review by Terence Sawyers doesn't really say anything about RAW but focuses on how the book tackles its subjects from a religious studies viewpoint and like the Bible is written in a modular fashion, i.e. in short chapters, a format which lends itself to reading from cover to cover or to focusing on specific bits, as the reader chooses. (I read the book front to back and thought it was really interesting, but I can endorse the section on Robert Anton Wilson in particular.)

In response to the review, Erik Davis wrote on Twitter, "The film and media scholar Terence Sawyers offers up an insightful and complementary SFictional review of High Weirdness in the SFRA Review: https://bit.ly/3ytcsxq I particularly appreciate his attention to the modularity of the text."

Here is my review of High Weirdness.  (No Twitter endorsement from Erik Davis, at least that I can remember, but I was happy with it.) Here are a few words from my review relevant to this blog: "Wilson fans will want to know that Davis devotes two chapters to him, one focusing on Illuminatus! and the other on Cosmic Trigger. The discussion of Wilson's libertarianism and esoteric influences are well-handled. Wilson also haunts the Philip K. Dick chapters in the book; Davis often uses Wilsonian terminology to discuss Dick."