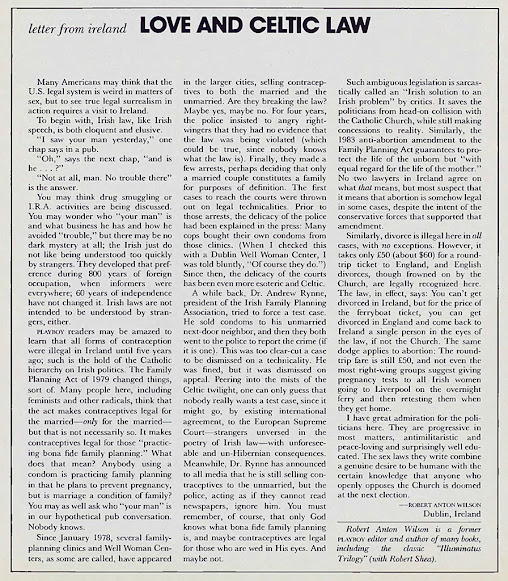 On Twitter, the Robert Anton Wilson Archives (e.g., Martin Wagner) reproduce a 1985 "Letter from Ireland" published in Playboy magazine which reports on how Irish politicians use ambiguity to be as progressive as possible with laws regulating sexual practices without openly defying the Catholic church. Excerpt:

"Similarly, divorce is illegal here in all cases, with no exceptions. However, it takes only £50 (about $60) for a round trip ticket to England, and English divorces, although frowned on by the Church, are legally recognized here. The law, in effect, says: You can't get divorced in Ireland, but for the price of the ferryboat ticket, you can get divorced in England and come back to Ireland a single person in the eyes of the law, if not the church."

(Update: Getting a divorce was legalized in 1995 in a referendum in Ireland, although it was not an easy, fast process. Then in 2019, the law was liberalized in another referendum.)

Thanks Martin and Tom.

Is this the only time Playboy gave him a byline?

That's a great question, but I don't know that answer. Martin, do you have an answer?

>Is this the only time Playboy gave him a byline?
No, e.g. this letter, but I have never seen an article or story by him (Shea had a few).