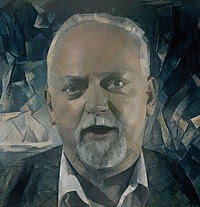 Brian Dean's latest RAW Semantics post "Déclassé / 'small change' / The Leftovers" is "a sort of personal appreciation of RAW" and I was particularly charmed by it.  He  talks about RAW's particular appeal, and also tries to explain why RAW never became a really famous author. One bit:

"When on fire (which seemed often), RAW produced striking insights in every paragraph – not just one or two per book. But those insights, like his books, appeared difficult to categorise and 'market' in the way that most respectable publishing houses and mass media like to categorise and pigeonhole. Spanning multi- topics, genres, gestalts and 'tones' they seemed – and still seem – inexhaustible as well as uncategorisable ('generalist'? Certainly not specialised)."

Another bit: "Many of us now miss RAW’s style of commentary on current events (in 2021 or even 2046) – we crave that particular flavour and level of weirdly unpredictable, high-information genius, even when it takes the form of 'small change' – disposable one-liners, spontaneous chimerical humour, original capsule reviews (of various books or films, etc) that were probably never destined for the New York Times cultural review section."

I like the New York Times (I subscribe), but yes, there is so much not covered there. When I search the archives, I can find no evidence that any of RAW's books ever were reviewed by that newspaper.  The paper did run a pretty good obit.

Brian also talks about RAW's prose mix, "the structure of conceptual-takes – juxtapositions of genres and belief systems, notions, impressions, observations, metaphors, logical arguments, cosmic ironies and down-to-earth opinions," and throws down a challenge: "(It seems that certain other genius writers do something similar in novels – but if you can name anyone else who does the same thing as RAW does with ideas, outside of fiction format, please let me know!)."

Beats me, although reading that sentence made me realize why I like certain other writers. Kevin Williamson, the conservative-libertarian, has a wit similar to RAW's and a willingness to defend unpopular people and ideas, although he doesn't have RAW's range of interests and he doesn't entertain so many unconventional ideas. Tyler Cowen has a range of interests that rivals RAW's but although he is a good writer, his prose is not as sharp or witty.

And when I write the previous paragraph, I can see the marketing problem that RAW's publishers have. If I call Kevin Williamson a "witty, iconoclastic conservative-libertarian writer," that's not entirely fair, as it doesn't capture his cultural interests (he has written drama criticism and written about music). But it's also not a terrible capsule description, either -- I can describe his appeal in a sentence. Tyler Cowen is harder, but if I describe him as a "libertarian-leaning economics professor who  thinks for himself and listens to a wide range of ideas," I do cover quite a bit a lot of ground. (Many of Cowen's main critics are libertarians who resent the fact he can't be counted upon to regurgitate the same old stuff.)

How do you define, in one sentence, a writer who is deeply interested in James Joyce and Ezra Pound, but also H.P. Lovecraft and Robert Heinlein, and also in quantum mechanics, and also in 19th century individualist anarchism, and in magick in theory and practice, and in Beethoven, and ..... I cannot come up with a few words to describe Robert Anton Wilson, although I think Brian captures his prose style nicely. Other people have talked about this, but it's worth mentioning again: You can shelve RAW's novels in fiction, but where do  you shelve his nonfiction books? Any decision is likely to feel arbitrary.

At the end of his post, Brian goes off topic to recommend the HBO show The Leftovers. I haven't bothered to watch it, but I've read the book. I've read all of Tom Perrotta's books. In fact, I like the books so much I'm afraid to watch the TV and movie adaptations, although I admit I did see the movie version of Election and liked it. In general, I am frightened of adaptations of novels I admire. I liked The Accidental Tourist and I generally like Jane Austen productions, but I hated the movie version of Roger Zelazny's Damnation Alley and I thought the movie of Elinor Lipman's excellent Then She Found Me was terrible. So in theory I should watch all of the Tom Perrotta adaptations, but I'm afraid to! I'll just read the books over and over, I guess.