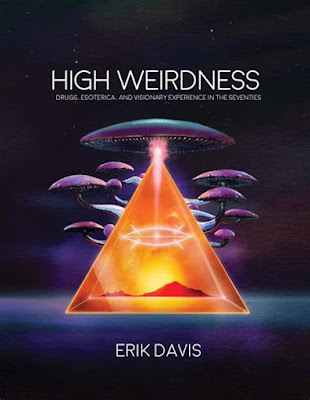 Was Philip K. Dick just crazy in early 1974, or did he have information beamed into him by a Vast Active Living Intelligence System?

And what was it about California in the 1970s that made mystical seekers ready to see a UFO after eating psychedelic mushrooms in Colombia,  or to obtain communications from advanced beings from the Sirius star system?

These are some of the questions California “counter-public intellectual” Erik Davis considers in his new book, High Weirdness: Drugs, Esoterica and Visionary Experience in the Seventies, released in the U.S. by the MIT Press.

The book focuses on three people who were, well, highly weird.

Author Terence McKenna journeyed to Colombia to gobble up psilocybin psychedelic mushrooms and wrote a popular handbook (under a pseudonym) with his brother explaining how to grow them at home.  Robert Anton Wilson, author of the Illuminatus! cult novels  and friend of Timothy Leary, experimented with combining occult rituals, drugs, sex and Beethoven and wound up wondering what reality he was living in. Dick already was a prominent science fiction writer with mental health issues and a drug habit when he began to perceive information was being beamed into his brain.

Davis chronicles and tries to make sense of their wild stories, pursuing his avowed goal is to “take them seriously without taking them literally.”

High Weirdness the most absorbing  nonfiction book I’ve read in months, draws parallels among the three men and their similar experiences. Davis also offers similar but briefer accounts of Leary, who thought he was receiving messages from the stars while serving time in a California prison, and dolphin researcher John Lilly, who once blamed a “Borg-like Solid State Intelligence” for shutting down the Los Angeles airport.

Wilson fans will want to know that Davis devotes two chapters to him, one focusing on Illuminatus! and the other on Cosmic Trigger. The discussion of Wilson's libertarianism and esoteric influences are well-handled. Wilson also haunts the Philip K. Dick chapters in the book; Davis often uses Wilsonian terminology to discuss Dick.

The most well-known of Davis’ weird trinity is Dick, who died in 1982 from a stroke but since then only has grown more popular. His fiction has been made into movies and TV shows such as Minority Report, Bladerunner and The Man in the High Castle, and reissued in new editions by the Library of America.

Dick has been closely studied by scholars and fans attempting to make sense of his oddball novels and his Exegesis, a nonfiction document more than 2,000 pages long.  Dick scribbled it trying to make sense of a 1974 experience when a reflection from jewelry worn by a woman making a delivery to his home triggered a series of visionary experiences which inspired  his last novels.
Davis helped edit an abridged version of the Exegesis for publication.

He also seems to have read nearly everything written about Dick and remembered many of the best bits. I did not know, for example, that Leary gave a copy of Dick’s The Three Stigmata of Palmer Eldritch to John Lennon, who considered making a movie out of it. And while I knew that Dick took drugs, I did not realize he took dozens of pills every day as a “knowledgeable and compulsive pillhead.” Or that Dick considered himself an Episcopalian.

Dick was only 53 when he died but was married to five different women. Even during his “closest pass at a convention mainstream life” he sometimes hit wife no. 3 and “more than a few plates were  hurled through the open, glass-walled parlor,” Davis writes.

Dick clearly could be a difficult person to be around, but redeemed himself, at least to people who appreciate fascinating and unique novels, by writing works such as The Man in the High Castle, an alternate history novel set in a U.S. occupied by Nazis and Japanese who have won World War II.
Dick came up with the plot twists in High Castle using the I Ching. Davis is adept at detailing the ancient Asian divination system and the other ingredients of the California counterculture.

Davis himself was a friend of McKenna and “teenage Deadhead” who gobbled up paperbacks of Dick’s science fiction novels. But he also took a degree in English literature from Yale and studied religion in a Ph.D. program at Rice.

This gives him the ability to understand the lifestyle of psychedelic weirdos like McKenna and Wilson. But he also has the scholarly chops to trace the influence of the Jesus Freak movement and H.P. Lovecraft on Dick, and to discuss how the experiences of his trio relate to William James The Varieties of Religious Experience.

Referring to his own  “peculiar” and “enchanted,” experiences, Davis writes, “Then and now, I consider my own work and mind to be part of this stream of feral, fringe, psychedelically-inflected thought, though I am equally a creature of media theory, and Zen, and the comparative study of American religion.”