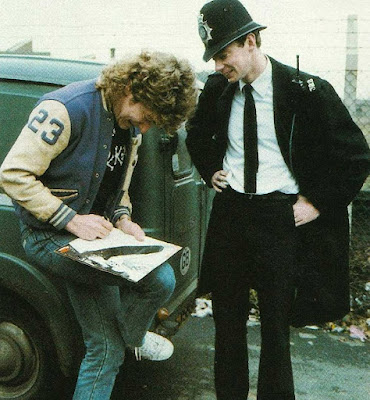 Robert Plant autographing a Led Zeppelin album for a policeman in 1982, posted on Twitter Friday in honor of Plant's 73rd birthday.  When I saw it, I thought, "I wonder if Oz Fritz has seen this." Note the number of Robert Plant's jacket.

Oz Fritz re-reads Bleeding Edge by Thomas Pynchon and he has a new blog post up as a result: "Bleeding Edge, Pynchon & Robert Anton Wilson."

Oz is involved in an ambitious reading project: "I have a personal project rereading all of Pynchon to see what themes or memes run throughout his entire oeuvre, a project that got delayed for over a year.  My plan was to read them in order of publication, next up on the list would have been Mason & Dixon until my favorite You Tube reviewer, The Book Chemist, a big TP fan, called Bleeding Edge his personal favorite."

Another reread is the offing to meet Oz' ultimate goal: "The depth of this novel is profound.   I've only given a tip of the iceberg glimpse of what can be found there.  I have to read it again myself for further research to fulfill my ambition of writing a book about the magical worlds of Thomas Pynchon and Robert Anton Wilson."

Here is Oz' thesis: "Pynchon hardly seems alone as a postmodern writer transmitting didactic Hermetic information.  Robert Anton Wilson experiments extensively with similar, but different techniques.  Other such novelists include James Joyce, Vladimir Nabokov, Malcolm Lowry, and William S. Burroughs." (A footnote to this: I wondered if Oz knew that Pynchon was a student of Nabokov's when Nabokov taught at Cornell.)

I haven't read Pynchon, but the approach of exploring a writer intensely sounds like what I do: I've read pretty much all of Robert Anton Wilson's work, but I've also read all of the fiction of Jane Austen and Tom Perrotta and all of Jack Vance's science fiction. Still working on reading all of Neal Stephenson's work, but I've read thousands of pages and most of his books.

Thank-you for posting this, Tom. I hadn't seen this photo of Plant before, very cool! I did learn Pynchon studied under Nabokov when we read and discussed Pale Fire.

The big discovery I made rereading Bleeding Edge this time involves the influence RAW had on Pynchon. Before reading this a second time I would have given it a 55 - 60% probability Pynchon read Wilson, now I'd say 90% or more.