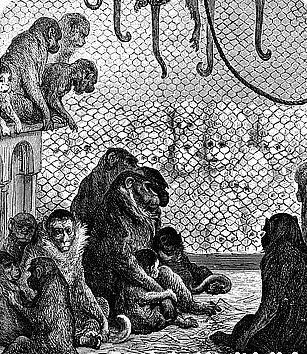 By Apuleius Charlton
Special guest blogger
Considering Eric’s thorough breakdown of the characters listed at the end of the chapter according to Leary’s Interpersonal Grid, I think we can all concede he’s the gold star student for the chapter. Thus this post is the presentation after the factotum’s; alas, I will disappoint.
Last week was the end of summer school and it’ll be time for the school year before I have a chance to catch my breath.  Last week it struck me that I was privy to a collection of unvarnished personalities and primal drives with much more variation than the lion house -- children  on the cusp of adolescence.
Perhaps it is my personal prejudice, but I find that most of the kids seem to be overwhelmingly driven by patrist notions of pecking orders and competition while also demonstrating a desperate need for attention and acceptance, hallmarks of the Bio-survival circuit. I witnessed one child manage to work himself into a couple sullen rages a day while trying to both please and outdo a rival, blither student. This same student would alternate between defiance and a childlike need to please when dealing with instructors.
As I’ve witnessed in the past, the children neatly divided themselves largely upon the basis of male/female. Older students (13-14) were more interested in talking to the opposite sex. Interestingly, it seemed that the female students who socialized with male students were more often the ones who would say or laugh at actions I perceived as cruel. The younger female students were by far the most obedient, applying themselves to activities, the quietest  and the least desiring of praise. Most of the young females were helpful and assisted other students and seemed to congregate in groups of 2 or 3 compared to the larger assembly of male students and older females. There were a couple of loners in both groups. Some of the “outsiders” seemed to prefer to interact with the adults or simply be left to their own devices. Ultimately I would say the range of behaviors I witnessed fell mostly into the COMPETITIVE-NARCISSISTIC, REBELLIOUS-DISTRUSTFUL, and COOPERATIVE-CONVENTIONAL categories on Leary’s Grid.
My “findings” last week were mostly in keeping with my prior understanding of children in this age range. Knowing some of the children’s histories adds a measure of understanding to my consideration of their words and deeds. I often try to convey the lesson that one should be kind at this age, as you will regret whatever moments of meanness you remember. Typing that out, I believe we mostly regret nastiness at any age with the addition of time and distance from the irritant. While I am an acerbic and critical person in private and online, I try my best to be kind and polite in “real” life. One never knows what someone else is dealing with. Perhaps it says something about my mask that I find being in public very tiring and tense. I’ll also drop any pretense of courtesy once someone else has breached my standard of decency. Yet, with age, my standards have generally become laxer and I am usually more interested in absenting myself from a potentially unpleasant situation than drawing it out by opening my yap.
I should probably clean my own cage before I continue observing the other apes. For those of you that keep up with the Ishtar Rising group, I’ll have the new post up today.
on August 02, 2021

Thank you for this post, Apuleuis.
I like how you combined “observing the primate pack hierarchy carefully, like a scientist” with the Interpersonal Grid. Putting some of the exercizes together seems like good everyday practice. It slowly becomes more natural for me to do so, as well as trying to guess people’s Thinker and Prover, and see similarities between human and non-human animal behavior. “To observe” seems to be a basic commandment in magick, and apparently RAW is slowly and subtly asking the reader to start doing just that throughout the first chapters of PR.

Regarding how much of one’s behavior and body language comes from wondering “if it came to hand-to-hand combat, could I beat him/her”, I tend to get as annoyed by people who shake hands like introducing themselves is a penis contest and they are about to castrate you, as I am by the ones who give you a lifeless hand with no grip at all. Thanks to the Plague, maybe Western social conventions will end up dropping this formality.

Toward the end of chapter 5, Bob Wilson asserts that “[the current rampages of territorial-emotional pugnacity sweeping this planet] are the birth-pangs of a cosmic Prometheus rising out of the long nightmare of domesticated primate history.” I think this should be understood in the same way than the idea that ‘every breakdown is a potential breakthrough’, which comes later in the book if my memory serves me right. I find this to be another example of the type of optimism from RAW Tom Jackson posted about last week.
I also like that this sentence brings clarity to the Joyce quote from a Gurdjieff-inspired point of view, at least to me. Here, history has been a nightmare because the vast majority of humans are “sleeping people” unable to show “fairness or decency” (Bob even writes before the quote on p. 29: “people are asleep and having nightmares”).

My guess would be that, through observation first, we can better start to understand ourselves and others and show more kindness to both. As Apuleuis wrote very justly, “One never knows what someone else is dealing with.” In so doing, hopefully a global Prometheus consciousness (perhaps located somewhere in this mysterious morphogenetic field?) would rise.

It could even be argued that, despite the world around us looking at first sight like utter shite, this is actually happening, as illustrated by John Higgs in his latest newsletter:
“When members of the [English football] team are attacked or racially abused, there’s no question that they come together in support of each other. That they take the knee to protest about the continued presence of racism in football is a no-brainer to members of their generation.”

Wonderful post! It reads like a report from an anthropologist embedded in a foreign culture because I can't ever see myself in a position to observe and collect such data. It seems like we all have to submit and go through those territorial games people play then, for some, figure out later how to undo (re-imprint and condition) those habitual C1 and C2 postures, responses and stored traumas (emotional armor) that don't serve us well.

The meaness/kindness riff reminded me of You Are Not the Target by Laura Archera Huxley which I believe RAW mentions in one of the Cosmic Trigger volumes, a book of very basic yet extremely useful magic exercises (she calls them "recipes"). The title recipe works very well to dissipate the bad feeling experienced when someone says something nasty to or about you, or in general, anyone giving you a hard time for no good reason.

This fossil poem from George Crabbe seems to connect with the rising of Prometheus exercizes. The last two lines suggests the poet wishes to get remembered as a kind soul:

"For this the Poet looks the World around,
Where Form and Life and reasoning Man are found;
He loves the Mind, in all its modes, to trace,
And all the manners of the changing Race;
Silent he walks the road of Life along,
And views the aims of its tumultuous throngs;
He finds what shapes the Proteus-Passions take,
And what strange waste of Life and Joy they make,
And loves to show them in their varied ways,
With honest Blame and with unflattering Praise:
'Tis good to know,'tis pleasant to impart,
These turns and movements of the human Heart;
The stronger features of the Soul to paint,
And make distinct the latent and the faint;
Man as he is, to place in all men's view,
Yet none with rancour, none with scorn pursue:
Nor be it ever of my Portraits told –
"Here the strong lines of Malice we behold."

Oz, I've never read any Laura Huxley before, but I'd like to check her out now.
I was only vaguely aware of her biography of Aldous.

Her meditative pathworkings are so lush with her captivating voice.
'The Rainbow Walk' and 'Your Favourite Flower' always bring a smile to my face.
I imagine her LPs are now difficult to find. I only have the mp3s.