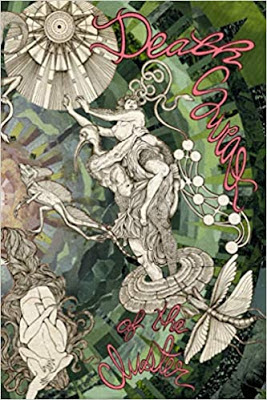 As I wrote recently, I really enjoyed Znore's new book, Death Sweat of the Cluster.

The book opens with an essay on "The 108-year Rosicrucian Cycle," and you can read the online version to see what I am talking about here.

The essay argues that a 108-year cycle began with 1904, which Znore links with the transmission Aleister Crowley received in 1904, launching the Age of Horus. June 16, 1904, is also the date for all of the events in James Joyce's Ulysses. The cycle ended in 2012. Znore ties 2012 to Terence McKenna's suggestions about the importance of the date.

"There is some evidence that Robert Anton Wilson also was aware of the 108-year cycle from 1904 to 2012," Znore writes. "Cosmic Trigger, first published in 1977, was one of the first books to feature an analysis of Terence McKenna's speculations about 2012."

It amused me to think that if Znore's theory was correct, I ought to be able to tie other important cultural events to 1904 and to 2012.

It seems to me 1904 is important as the first year of aviation. The Wright Brothers first flew their airplane in December 1903,  so 1904 was the first entire year there was such a thing as an airplane.

I can certainly argue that 2012 was important, too, particularly for Robert Anton Wilson fans. That's the date that a court decision paved the way for the creation of the Robert Anton Wilson Trust. According to RAW's daughter, Christina Pearson, "The Trust was initiated as part of the probate court judgment that finally closed the RAW estates probate in October of 2012. The court required a Trust to be created, and assigned me as Trustee. The RAW Trust was established in January of 2013 with the responsibility of protecting Bob’s literary legacy (his only resource)."

All of the activities of the Trust, including the establishment of Hilaritas Press and that small press' efforts to preserve Wilson's literary legacy, can be dated to that 2012 court decision.

Email ThisBlogThis!Share to TwitterShare to FacebookShare to Pinterest
Labels: Death Sweat of the Cluster, Groupname for Grapejuice, Znore

I remember feeling hopeful at the end of 2012 with the re-election of Obama over Romney, but otherwise it seemed like a non-event. Or just a lot of hype leading to increased expectations that fizzled.

I think TM's Timewave Zero was successfully and politely debunked by the mathematician, Matthew Watkins. I've never forgotten the curious article by Gyrus in his journal Towards 2012 which argued against the hype surrounding the same date. I think it came out around 1998. So the journal had it sussed. I knew a witch back then with a funny sense of humour...she'd refer to the journal as, Beyond 2012.

There's actually a video of them (Matthew & Gyrus) in conversation, which is online, discussing the 'Watkin's Objection' & TM's reaction to it. That came out 2 or 3 years ago.

The conclusion with Hilaritas is good though - yay!

I always wondered how the trust came to be!