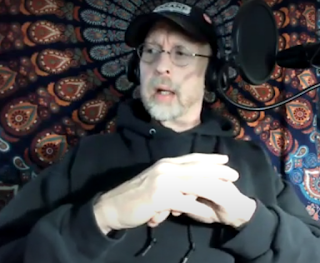 So, on Friday I'm reading at Slate about how U.S. Rep. Marjorie Taylor Greene did a posting on Facebook about how Jews attacked California with a space laser, causing the gigantic wild fire in in 2018. And it's beginning to look like, however reluctantly, I'm going to have to pay attention to this QAnon stuff.  And I'm wondering how somebody like Congresswoman Greene actually gets elected to Congress. (Wouldn't a panel discussion with Greene and Alice Walker be interesting? People are always complaining about we don't have enough bipartisanship, and that would bring the left and the right together!)

And then I get a notification from Patreon that Prop Anon has done a video where he interviews Joseph Matheny, the creator of Ong's Hat and the force behind the Robert Anton Wilson "Lost Studio Sessions" recording (get your free download here.) The video has been broken down into two parts, and the first one features Matheny talking about QAnon as a "weaponized Alternative Reality Game" and as a cult. Matheny also describes people who read Illuminatus! and did not get the joke. Quite interesting. I look forward to part two.

You can watch on YouTube, but Prop also hopes some of you will consider checking out his Patreon account.