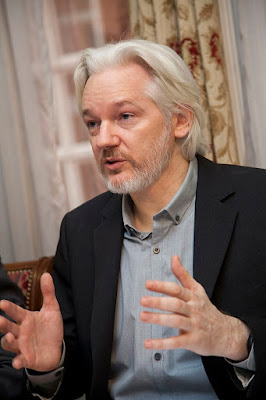 Matt Taibbi has a great article on Assange, and on the kinds of people who actually get pardons in the U.S.:

Our invasion of Iraq had been a spectacular failure — unlike pictures of returning coffins, that couldn’t be completely covered up — and Americans learned about grotesque forms of war profiteering. These included the use of mercenaries to whom the taxpayer unknowingly paid lavish sums, to commit horrific war crimes like the Nissour Square Massacre, also known as “Baghdad’s Bloody Sunday.”

One of Donald Trump’s most indefensible (and bizarrely, least commented-upon) acts was the pardon of the four Blackwater guards who shot and killed those seventeen Iraqi civilians, including women and children. The New York Times story covering the Blackwater pardon spent just four paragraphs on the case, sticking it below apparently more outrageous acts like the pardon of George Papadopoulos.

Everything concerning Assange is outrageous, terrifying, inhuman, and frankly very worrying for the state of democracy in the West. The more you like into his case and the more you find yourself in Absurdistan.
Thank you for posting this.
Free Julian Assange.