No, it's apparently not an Illuminati Bible 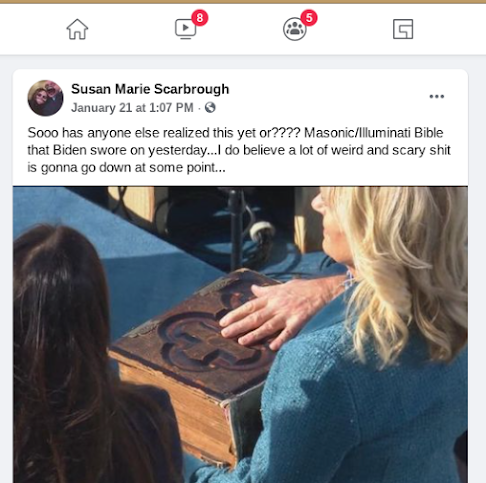 A story from Reuters explains that social media reports such as the Facebook posting above are spreading claims that President Joe Biden was sworn into office using a "Masonic/Illuminati Bible." (This is apparently the usual social media nonsense, rather than a clever attempt to make Biden more interesting than he actually is.)

In the 1960s, American writers Robert Anton Wilson and Kerry Thornley published gag letters in Playboy magazine from alleged “readers” regarding a secret organization called the Illuminati (here). Though the letters were intended as satire, the myth morphed into a popular conspiracy theory.

Emerging as a countercultural icon, Wilson, along with Robert Shea, published “The Illuminatus! Trilogy” in 1975, described here by the New York Times in its 2007 obituary for Wilson as “a mind-twisting science-fiction series about a secret global society” that became a “cult classic.”