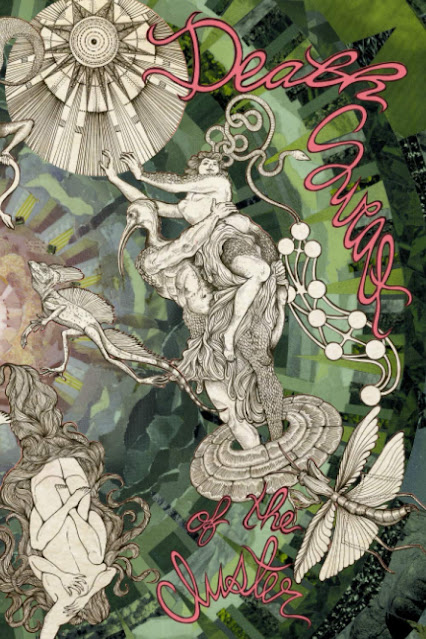 Znore is the author of Death Sweat of the Cluster (pictured above), a collection of pieces selected from his blog, Groupname for Grapejuice.

I enjoyed the book a great deal, and I thought it would be fun to ask Znore to take a few questions about topics covered in the book. This is one of my favorite interviews that I've published here.

If you like this interview, see my earlier interview with Znore.

RAW Illumination: When I read your book, it made me want to read or re-read many of the books you mention, i.e. I plan to read the new translation of "The Odyssey" by Emily Wilson and right now I am trying to read the Bible from start to finish, something I've never done, even though I read the New Testament when I was a teenager. I also plan to read more James Joyce, and I just wonder if that's one of the reactions you were hoping for.

Znore: Yes, this is exactly a response I was hoping for. Umberto Eco wrote, to paraphrase, that Finnegans Wake is the paradigm of his idea of the "open work". Essentially this means that there is no fixed and final reading of the text, that it is completely open to chance and novel interpretations, and that it continually urges us to venture outside of itself into the entire field and experience of literature and life in general. Riffing on this idea, I've thought that in the wake of the Wake all books turn into the Wake. All texts become open works; they can all be read as if they are incorporated into the webwork of Finnegans Wake. And with Jacques Derrida -- another thinker who was profoundly affected by the Wake, who said that it singularly did not need to be deconstructed because it is deconstruction itself -- there arrives the idea that there is nothing outside of the text, nothing in experience that cannot be "read". These are ideas that I'm playing with, that I may be misreading but that is also the point. Obviously I cannot rewrite the Wake, or even approach it, but I can try to emulate this aspect of it. These essays, now in my book, were written with the aspiration that they would inspire readers to open other books, to view the opening of books and the linking together of books as being a kind of adventure, and then to further extend this process throughout all media and all moments of perception. Not that humble! I'm happy if this book has provoked you and other readers to read more.

RAW Illumination: I liked your efforts to reclaim Ezra Pound's literary legacy, and I like your approach, i.e. acknowledging his terrible prejudices and not trying to excuse them, but also arguing that they don't invalidate his literary work. The world seems increasingly polarized politically -- do you worry that his reputation will fall?

Znore: Ezra Pound is a vitally important figure to consider at precisely this time. His influence on poetry is enormous. And his influence on prose -- through Hemingway and others, and through his literary criticism -- is just as immense. And Pound, in his own time, tirelessly promoted other writers and artists and brought them to the attention of the world. Modernism without Pound would undoubtedly have had far less impact. On top of this, Pound's own writing in the Cantos and his earlier poetry is not to be missed. But -- Pound was also a fascist and an antisemite who eventually prodded, on Rome radio during WW2, U.S. and other Allied soldiers to support the Axis powers. Even though towards the end of his life he renounced his former antisemitism, this part of Pound's work and career should not be ignored. U.S. poet and reluctant Pound disciple, Charles Olson likely put it best:

It is not enough to call him a fascist.

He is a fascist, the worst kind, the intellectual fascist, this filthy apologist and mouther of slogans which serve men of power. It was a shame upon all writers when this man of words, this succubus, sold his voice to the enemies of the people.

Second generation Beat poet, Ed Sanders, in his Tales of Beatnik Glory, discusses the "Lb Q" or "Pound Question" that was on the minds of poets in the late '50s and early '60s: Pound is a poetic genius but he's also a complete reactionary; what can we do with him? Certainly his fascist influence has continued to the present day through groups like the CasaPound in Italy and followers of Eustace Mullins in the U.S. I don't think Pound's reputation can be completely redeemed. Without going extensively into it here, his fascist worldview is far too tied up with his thoughts on economics and history, his spirituality and even his poetics to entirely overlook it. Yet, especially by taking the perspective of what Pound called "Eleusis" in his work, there is much that is inspiring and beautiful in Pound also.

But I think the main reason why Pound is so relevant today, is that he represents a kind of archetype or figure from the interwar era: an avant-garde and libertarian writer and artist who was somehow seduced by the worst kind of political movement.  And echoes of this process can be heard and felt at this very moment. Just as Pound and other bohemian artists spiraled towards fascism, too many bloggers, artists, occultists, creative people have veered off in a reactionary direction over the past decade or more. (Maybe in response to excessive political correctness, which also had its parallels in Pound's day.) I've seen this happen in real time. The life of Ezra Pound can act as a cautionary tale in this regard.

RAWIllumination: As I wrote in my blog post today, William Blake apparently is a more influential writer than I realized, and  you write a lot about Blake in your book. What is it about Blake that would particularly appeal to a Robert Anton Wilson fan?

Znore: I think there are many points of contact between William Blake and Robert Anton Wilson. The character Blake Williams in Schrödinger's Cat is an obvious hat tip, but there is a much wider shared understanding of the two writers. Even if RAW was not directly influenced by Blake -- which I'm sure he was -- he would have been affected by the poet's worldview through writers, like Joyce and Pound, who did deeply influence Wilson's thought. Aside from these influences, though, is simply the immense and almost atmospheric presence of Blake within the mid-20th century counterculture that RAW played a vital part within: from Allen Ginsberg's 1948 "Blake Vision" in Harlem, which set Ginsberg off on his career as poet-prophet, to Jim Morrison & the Doors (of perception), to the constant ubiquity of Blake within the pages of the underground press.

Email ThisBlogThis!Share to TwitterShare to FacebookShare to Pinterest
Labels: Death Sweat of the Cluster, Groupname for Grapejuice, Znore

I just finished Znore’s book Tuesday night and I loved it. Like you I found myself wanting to read many of the works he talks about. In my case it has involved a dive back into the Cantos, and into McLuhan. My only complaint about the book is the formatting. I don’t know how you feel about it but I found myself increasingly annoyed by the passages in all caps, or worse, in boldfaced all caps. It seems to me that anyone reading that particular book will be intelligent enough to figure out what is most important and doesn’t need to be shouted at. I know it’s a matter of personal taste, but I also find it aesthetically ugly. That aside, I would recommend it to anyone who follows this blog.

Thank you for sharing with us another great interview Tom !
Your hyping up of Znore and his book has really been turning me on to his work, and I am now trying to get my hands on a copy.

I also just finished Death Sweat of the Cluster. I'm glad these blog posts were made into a book & think they fit together very nicely as a book. Lots of great artwork as well as many other books & links to explore. A win, win for me at least.

Great interview, makes me want to read the book.