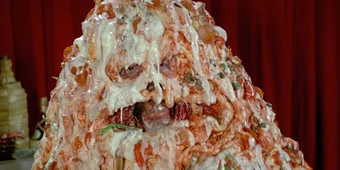 Chapter One “The Thinker and The Prover”

By Apuleius Charlton Special guest blogger
I guess for the next few paragraphs I’ll equivocate, as always, with what the Grand Old Man has to say about the Thinker and the Prover. Namely, while I agree with the general treatment, I don’t believe the model is infallible. The Thinker does Think but the Prover doesn’t always do the trick without drugs, trauma, or psychosis.
My daughter loves Pizza Hut. A couple years ago I took her to Pizza Hut before going home after I had picked her up: now it is her favorite pizza. The town that she lives in and I grew up in doesn’t have a Pizza Hut which I can imagine adds exclusivity, most alluring of spices. One of her most successful birthdays was at a Pizza Hut. So, the other night I found myself shivering outside of a pick up window, on foot, waiting on Pizza Hut.
The Hut nearest my home closed recently and when my daughter was with us over the holidays she was adamant that she needed some of that pizza pie. So I found the nearest franchise, placed an order for pick-up and drove there with my daughter. It was a relatively mild night so I only wore a cardigan and let my daughter go out without a coat. I tried the door of the restaurant and found out it was locked. Instead I asked an employee on a smoke break if I needed to go through the drive thru and she instructed me to just walk over to the window. I did so.
For what must have seemed a longer span of time than it was, I stood there with Lucy as cars pulled up behind us. I felt like a dumbass standing in the spotlight of a Jeep’s headlights. Eventually Lucy got cold and I took off my cardigan. As I stooped to put it around her I saw that the ground was littered with coins. Of course, this is one of the most natural environments to find dropped change in but it struck my sense of synchronicity. As much as I ruminated on the possible significance and tried to stir up my courage, I couldn’t bend over and avail myself of any of the coins, I couldn’t even ask my daughter to pick one up because of the anxiety of standing in a drive thru with someone else looking on. Odd that no amount of will power or curiosity could cause me to break my societal (4th Circuit) imprints that 1) it is an intolerable offense to stand in a drive thru and be seen and 2) it is undignified to stoop to pick up change.
It is amusing and tragic that my social-anxiety is brought on by the niggling idea that other people might be judging me in the same way I judge casual passersby. Instant Karma! When my car has broken down and I’ve either needed to change a tire, wait for help, or walk for service I am incredibly, cripplingly troubled by the eyes of those driving by. My thinker seems to occasionally be a Big Brother that doesn’t exist. I know on some level that the driver of the Jeep wouldn’t remember me grabbing one of the coins at my feet an hour later, on another I feared that they would to the core of my classist being.
On the same token, RAW talks about the Thinker and the Prover in the societal terms of anti-Semitism and Feminism. I don’t agree about accusations of anti-Semitism, or its invasiveness in our society in the same way that politicos such as Ben Shapiro, Bari Weiss, or Brett“Bedbug” Stephens do- I am admittedly anti-Zionist and am married to a Jewish woman who feels the same way. It isn’t the golden calf of prejudice it was to many 20th century Americans (many of whom still gladly used the racist term “Jewed down”) and my Thinker and Prover show time and again that anti-Semitism is tied to wider racism on the right, instead of being a silent predjudice of the political left. At the same time I am as hostile as RAW was to certain forms of Feminism (Dworkin or other forms of radical, or anti-heterosexual feminism) but I also believe in its overarching goals and assessments of society. I consider myself, and all reasonable peoples, to be feminist. I would never identify with the Men’s Rights Movement no matter how much I believe that Robert Bly “got done dirty” (my beloved wife’s terminology). There are nuances and I’m not sure my Prover works as well anymore as my Thinker is constantly confused. I wish I had more convictions.
My daughter loves Pizza Hut because of their stuffed crust pizza. Most of the time she only eats one slice and doesn’t touch the crust. The Thinker thinks and the Prover sometimes does its job.

Interesting post. I think of the line from "Rock and Roll High School": "Pizza, sounds good."

Perhaps if you think "my Thinker is constantly confused" your Prover will prove it.

Interesting indeed. Upon rereading this first chapter of PR, I remember thinking that nowadays, RAW could never get away with writing this :
"Similarly, Feminists are able to believe that all men, including the starving wretches who live and sleep on the streets, are exploiting all women, including the Queen of England."

He sure has a point, but political correctness, as well as changing times, would have such a sentence making 2020's people jump in horror.
Thing is, there is never a good excuse for being anti-semitic (anti-zionism being much more specific), but there are many different types of Feminists and putting them all in the same basket isn't going to get us anywhere. But regardless of how well-intentioned Feminists might be (for instance in places where they fight for free agency over their lives and body), the main problem tends to be the same than with most -isms : a clear lack of ability to take a step back and see the greater picture in order to be able to question itself.

So Gregory, when you write "I’m not sure my Prover works as well anymore as my Thinker is constantly confused. I wish I had more convictions", maybe I misunderstand but, it seems to me that you actually succeeded at understanding that one reality tunnel is just as experientially valid as another (if not necessarily as moral or ethic).

But indeed, if your Thinker thinks "what s the point of having any convictions since they are not really realities but just opinions disguising as realities, and I am not my opinions anyway", your Prover might become kind of at loss about what exactly it has to prove.
Would that be a potential first step into Chapel Perilous ?

Just a quick update. No quarter yet, but a nickel here a dime there. A nice synchronicity in listening to an interview with Diana Walsh Pasulka about her book "American Cosmic". Our man Jacques Vallee featured heavily in a wild romp through ufo culture. RAW would approve.

A couple of thoughts on the OP: the magick of finding quarters worked when you served something (possibly) greater than yourself - you wouldn't have ended up in the spot except for your daughter. It seems a good idea not to break social norms in some situations for the sake of the magick experiment. Probably nothing drastic would have happened picking up the quarters there, but you never know, why risk it? A more extreme example: if one saw a quarter on the ground near a police officer, it probably shouldn't get picked up until they leave especially if you incarnated as a black man. Magick stays occult for a reason.

There must exist different meanings/uses of the label Zion. I currently work on a reggae flavored music project called Zion Collective, one of the songs sings about "holy Mount Zion." I don't think any of the members or any of the song subjects concerns Judaism or anti-Judaism. I believe it has more to do with Rasta belief systems. I don't know what the political meaning of Zionism represents.

I think that in rastafari beliefs, Zion represents the opposite of Babylon, a promised land of sorts, rid of all evils (greed etc). The name has been used again in those Matrix movies, Zion being the good guys' hideout from the machines, the place where free humans live (a fair amount of them having dreadlocks, if I recall correctly).
I am not utterly familiar with the rastafari religion, and have no idea why there would be a connection with Judaism, but Zion also is the promised land in this context. Rather than to bring a political discussion in here, I will link you to this page:
https://rationalwiki.org/wiki/Zionism

It is interesting for me to try and see why one wouldn't pick up quarters because "it is undignified to stoop to pick up change." To be honest, this wouldn't even have occured to me. I assume that if, instead of a quarter, there is 10 dollars on the ground, you wouldn't be undignified anymore but "lucky". (many people would still consider 10 dollars as "change", and give it away as tips) So where is the line in this seemingly arbitrary societal rule ?

Thinking about it, it is no wonder that Bob Wilson's ideas would resonate so much in me, because it seems that I have mostly failed at imprinting correctly what falls into the 4th circuit moral conditioning. When I was a teenager, I remember realizing that humans mostly are playing games, the rules of which to this day I still find baffling. I have a sort of innate skepticism because fundamentally, I do not understand much at what is going on around me.

When nothing makes sense, the answer might be fighting back with higher absurdity. I hope we will see more healthy Discordianism popping up here and there in the next few years.

Finally, I have found my first quarter. It was at the gym at the leg-curl machine. It has been roughly a month, starting PR again, reading these posts, and looking. I was going to ask the group - what do they understand by 'imagine vividly' per the instructions. I only ask because I was in a sensory deprivation tank earlier yesterday before going to the gym and had plenty of time to vividly imagine my quarter - I'll grant you I saw one that was stamped in 1985, but the found one was stamped 2020, so it didn't have an eagle on the back. But hey, I'll take what I can get.