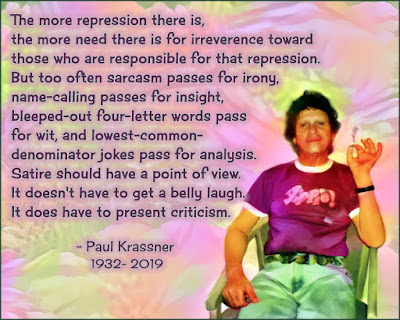 Michael Johnson writes (to an email list, reprinted by permission):

"I loved this guy.

"One night my wife and I went to go see him give a talk at the Midnight Special bookstore on the Santa Monica Promenade. His appearance wasn’t advertised very well, so there were only about 12 people who showed up. So he did his entire routine standing amongst us, as if we were all at a party. He interacted with us and improvised a lot. He was totally hilarious. I bought one of his books and asked him to sign it as if I had been there with him at the 1968 Democratic National Convention, so he did.

"Every time I had a Q that I thought he’d be able to help with, I emailed him and he was very gracious.

"The doing LSD with Groucho thing is something I’ve told a lot of people about, but they often didn’t believe me.

"Read him. In his many books he recycles his own stuff a lot, like RAW did, but I never minded. There was always enough new stuff to make me happy.

"I’ve recommended his autobio, Confessions of a Raving, Unconfined Nut to so many people and everyone has loved that book. I consider it essential for understanding the counterculture from 1960-80. His story about the San Francisco police riot on “White Night,” when protesters showed up on the streets of SF, angry that Dan White’s “twinkie defense” worked, is harrowing. Paul wasn’t doing anything violent, but some cop beat on his leg so bad he walked with a limp the rest of his life.

"Paul took pride in never doing any legal drugs. I’m not sure how his last few years went, but who really cares?

"Bless him and Dove sta memoria. He gave RAW a huge break."

For more RAW connection, see my two previous blog posts. One of my earlier posts on Krassner.

I think it was on Michael Johnson's blog that I learned about a book called Pot Stories for the Soul, edited by Krassner which I subsequently read. An excellent read... RIP Paul Krassner...

Much respect for Mr. Krassner and condolences to his loved ones.

A couple of the stories Fly told about their interactions remind me of a baton getting passed on.

A song for his journey: