The saga of And/Or Press 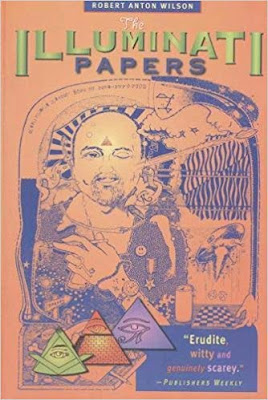 I've been reading the new Erik Davis book, High Weirdness: Drugs, Esoterica and Visionary Weirdness in the Seventies. I like it a lot; everyone who reads this blog would likely find it very interesting. More about it soon.

On page 170, Davis briefly mentions "the independent Berkeley publisher And/Or Press, which also put out books on Gurdjieff, laughing gas and nude Tai Chi." It also put out the McKenna brothers' Psilocybin: Magic Mushroom Grower's Guide: A Handbook for Psilocybin Enthusiasts, which came out under a pseudonym.

I don't have any of those books, but I do have two Robert Anton Wilson books put out by And/Or: The Illuminati Papers and Right Where You Are Sitting Now, two of my favorite RAW books.

I realized I didn't know anything about And/Or Press when I read Davis' passage. I ran a search, and it turns out there's a Wikipedia article about And/Or, and also its successor, Ronin Publisher.  Ronin is still around and has a bunch of Timothy Leary titles.

Right Where You Are Sitting Now is listed for sale on Amazon as a paperback. No ebook is listed. The Illuminati Papers, as put out by Ronin Publishing, also is listed, and there's also a Kindle.

These two titles seem to be an anomaly, as all of RAW's other books either are published by Dell (e.g., Illuminatus! and  Schroedinger's Cat) or were eventually acquired by New Falcon and then Hilaritas Press, the imprint of the Robert Anton Wilson Trust.