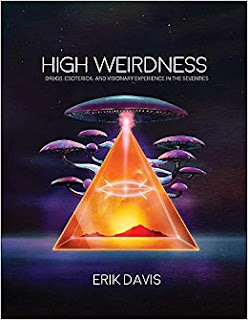 A couple of points about Erik Davis' excellent new book, High Weirdness: Drugs, Esoterica and Visionary Experiences in the Seventies, which I am still reading (I haven't finished the RAW section, which is the middle of the book, between Terence McKenna and Philip K. Dick.)

1. Here is one arresting paragraph:

"Wilson always played the garage philosopher, packing his conceptual jams with chatty riffs and refrains, corny jokes and outlandish follow-my-wink enthusiasms. This makes his work appealing to late adolescents, but less so to others. Still, he remains an important and serious thinker, albeit an unsystematic and sometimes sloppy one." (page 220).

A couple of points: Wilson was not an academic. In academia it is currently fashionable to focus upon one narrow field of study. E.g., almost nobody is an expert on the later Roman Empire; professors are experts on the later Roman Army, the evolution of Roman cities in the later empire, etc. The professors who bother to write books on the general history of the later Roman Empire perform a valuable service to undergraduates and interested laymen such as me, but few risk doing so and being caught out in mistakes, i.e. being accused of being "sloppy." If you try to transmit current scholarship in your field to a general audience, you are inevitably targeted for carping criticisms.

Wilson was a generalist. He wrote about libertarian political theory, James Joyce, quantum mechanics, Beethoven, Timothy Leary's eight circuit theory of consciousness, Korzybski, magick, and many other topics. Did he probably make mistakes? Yes. But a generalist has his uses. Not by accident, I think, did Michael Johnson name his blog Overweening Generalist.

2. About RAW, Erik writes, "One of the more charming aspects of Wilson as a writer is the fact that, unlike many charming autodidacts, he does not pretend to think in isolation. His texts are unusually generous in acknowledging his sources, his influences and his intellectual heroes...." (page 221.)

Davis also is good about acknowledging his sources. One of the strengths of High Weirdness are the footnotes, where Davis not only lists his sources but makes many interesting comments. I am reading it with two bookmarks, one for the text and one to keep my place in the notes.

I recently finished High Weirdness & I too had to use two bookmarks. I also mentally scanned the footnotes for the commentary ones & noticed when they were just references to books (page numbers) so I didn't have to flip back & forth so often. I thought it was a really good read...

I have to say, many of my favorite writers are supposedly popular with adolescents... Let's see: RAW, Charles Bukowski, Hunter Thompson... Wonder what that says about me, nearly 50 years old? I never grew up, I guess!

"Garage philosopher"  caught my attention also. It seems Erik Davis minted the term in order to distinguish between institutionalized philosophers and to use Karl Mannheim's term "free floating intelligentsia" ?

When it comes to "generalists" vs "narrow specialists" I somehow tend to lean toward generalists since they have the ability to look at things from different angels and see them within social and cultural construct. I somehow feel more comfortable among generalists and trust them more. I am aware that specialization is often necessary, but let's place it within context since everything seems so connected.

In search for "The Other One" I enjoy Erik's references to "volatile ontological instability" and "ontological turbulence of high weirdness" in some mind-bending sentences: "This weird gap also means that the basic operation of recursion  -  of self-reference -  paradoxically calls forth the Other that is already within the self". (p.139)

I still like some of the writers I discovered in adolescence such as Philip K. Dick, Vladimir Nabokov, Harlan Ellison, J.R.R. Tolkien, etc., so maybe I never grew up either!

There was a period there when Bob and tim (Leary) spilled a fair amount of ink on the values of sustained adolescence (as a method of avoiding calcified reality tunnels) and generalism versus specialization. Remember “specialization is for insects“?