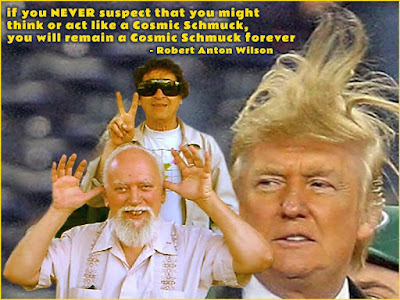 I have other things to get to, but let's stay on Paul Krassner for a moment; he's worth it.

As I wrote yesterday, Paul Krassner reportedly is in hospice care and won't be with us much longer. The sad news in the Tweet is from Mondo 2000, a must-follow Twitter account.

Branka Tesla wrote in a comment, "Paul Krassner wrote an Afterword for Robert Anton Wilson's last published book - Email to the Universe - and he made me burst with laughter when I read his last sentence "May he rest in lasagna."

Speaking of Hilaritas Press, the above meme from the RAW Trust was Tweeted on July 17, with a followup Tweet the same day explaining, "It is (pardon the E-Prime) Paul Krassner behind Bob."

Jesse Walker wrote, on Twitter, "Sad news. Paul isn't just a talented satirist; he's one of the menschiest writers I've had the privilege of knowing." Arthur Hlavaty on his blog wrote, "It all started with The Realist. Editor Paul Krassner was brilliantly witty and cynical, and the zine also introduced me to Robert Anton Wilson and Albert Ellis, among others."

Krassner was the mentor for Bob Abel, the book editor who launched Robert Anton Wilson's (and Robert Shea's) career.  Paul Krassner was kind enough to help me when I wrote that article.
on July 21, 2019

Rest In Peace Paul.
may the lasagna be with you.