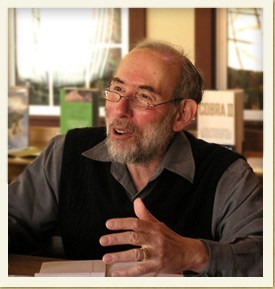 UFOs and "flying saucers" have suddenly become a hot topic again, with a flurry of articles in the press and a new book, "A" is for Adamski: The Golden Age of the UFO Contactees by our favorite crackpot historian, Adam Gorightly.

So when John Wisniewski offered to interview UFO author and retired professor of religious studies David Halperin for my blog, I immediately agreed.

Halperin is the author of the novel Journal of a UFO Investigator. About the book, writer Iain Pears wrote, "Journal of a UFO Investigator is a remarkable book.  Part science fiction, part novel of growing up, part surrealist voyage into the imagination, it is a disconcerting and satisfying experience." Other people said nice things, too, but since I like Iain Pears, he gets primacy of place. Hey, it's my website. Halperin's next book, Intimate Alien: The Hidden Story of the UFO, is coming in 2020 from Stanford University Press.

To learn more about David Halperin, please visit his official site. You can find him on Facebook,  and you can sign up for his monthly email newsletter, which will show up in your inbox every Tuesday.

John Wisniewski is a freelance writer who has written for L.A. Review of Books, Paraphilia magazine, Toronto Review of Books, Urban Graffiti magazine and other publications. He lives in West Babylon NY.

JOHN WISNIEWSKI: When did you become interested in UFO sightings, David?

DAVID  HALPERIN: I became interested in UFOs in the fall of 1960, when I was twelve going on thirteen.  A friend and I were working on an extra-credit science project, which I think was supposed to have been about life on other planets.  (Back then, it still seemed remotely possible that Venus or Mars might be inhabited.)  We decided to include something about flying saucers, and in our local library I stumbled across Gray Barker’s They Knew Too Much About Flying Saucers.  I read it, and was first terrified, then inspired to solve the mystery that Albert Bender had (allegedly) solved before he was silenced.  I never stopped trying to solve that mystery, although I now understand it far differently from the way I did at age thirteen.

JOHN WISNIEWSKI: If I wished to learn more about UFOs which are the most informed books on the subject?

DAVID HALPERIN: Ideally, I’d suggest you work your way through the two volumes of Jerome Clark’s UFO Encyclopedia, either the 2nd edition (1998), or the 3rd edition (2018).  (I personally prefer the 2nd, even though it’s out of date.)  But that is a formidable and time-consuming project, and more modest suggestions would be: Brenda Denzler, The Lure of the Edge: Scientific Passions, Religious Beliefs, and the Pursuit of UFOs (University of California Press, 2001) and Thomas E. Bullard, The Myth and Mystery of UFOs (University Press of Kansas, 2010).  Both of these are excellent, sober, thoughtful pieces of work.

JOHN WISNIEWSKI: What may have inspired you to write Journal of a UFO Investigator?

DAVID HALPERIN: The inspiration of Journal of a UFO Investigator was memories of dreams and fantasies I had as a teenager.  I remember, one brilliantly clear but bitterly cold evening in December, staring into the black sky and imagining a blazing red disk proceeding slowly across it.  I knew I wasn’t actually seeing the disk, in the same way that I was seeing the stars—including Sirius, whose blue color I think I then perceived for the first time—but I was absolutely convinced such things were in the skies for me to see, if only I would look up.  In writing Journal, I asked myself: what if I did indeed see such a disk?  And what if it were to topple on me out of the sky?  That was how the first chapter was born.

A year or two later, I had a dream: I was in a rambling old house in the country, at a meeting of ultra-serious teenagers dedicated to exploring the realms beyond the edges of science.  All the boys, myself included, were dressed up in jackets and ties.  And there was a beautiful blonde in an evening dress … and then I woke up.

Much of Journal was devoted to answering the question: what would have happened if I hadn’t woken up?

JOHN WISNIEWSKI: Could you tell us who Frank R. Paul was, David?

DAVID HALPERIN: Frank R. Paul was one of the great science-fiction artists.  Beyond this, I know nothing beyond what I’ve gleaned from the Internet—especially at www.frankwu.com.

JOHN WISNIEWSKI: Over the years, has there been an increase
In the reporting of UFO sightings?

DAVID HALPERIN: The figures given by Cheryl Costa and Linda Miller Costa, in their UFO Sightings Desk Reference, show a pretty dramatic increase from 2001 (3479 reports) to 2012 (14077), and some falling off after that.  The Costa book only goes up through 2015; I have the impression that the decline has continued over the past four years.

The Costas estimate, on the basis anecdotal evidence from the late Stanton Friedman, that only about 10% of UFO sightings are reported.

JOHN WISNIEWSKI: What was the UFO sighting that really introduced UFOs to the public
awareness, David?

DAVID HALPERIN: There’s no question: it was the Kenneth Arnold sighting of June 24, 1947, which triggered the wave of sightings in the weeks that followed and introduced “flying saucers” to the American language.

NOT Roswell, which after an initial flurry of interest (on July 8-9, 1947) was quickly forgotten, and didn’t come to light until 1978.

JOHN WISNIEWSKI: What is being covered up about the nature of UFOS, being tied to religion and myth? What does your main character discover in his journey, in Journal of a UFO Investigator?

DAVID HALPERIN: To take the second part of your question first: I think the epiphany in Journal of a UFO Investigator comes when the narrator returns from Israel and discovers his mother is dead.

“Now I know who they are, the three men in black.  I knew the moment my father spoke the words Mom is dead and their darkness filled the car, blotting out the headlights and the neon signs and even his face behind the steering wheel.  And I knew: they’ve won.  Always they will win.  In every life theirs is the victory.” (p. 264)

They’re embodiments of death, and the collapsing of his world at his mother’s death is represented as the crashing of the UFO he pilots, and himself taking on the character of an alien.

I wasn’t sure quite what you meant by the first part.  I think the cover-up, whatever its roots may be in reality—I do believe that Albert Bender was visited by three men, probably FBI agents who assumed his “International Flying Saucer Bureau” was a Communist front organization and wanted to shut it down—is part of the myth.  The Men in Black theme gets its power precisely from that which is unstated in it, its reflection of Gray Barker’s experience as a closeted gay man in 1950s West Virginia.