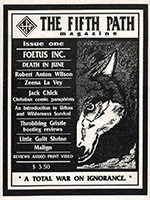 Thanks to Martin Wagner, we have another rediscovered interview with RAW, an interview in Fifth Path magazine published in 1991. Thanks again, Martin!

Quite a bit to enjoy; I had never heard of this planned play, for example:

Are you working on any plays?

Robert Anton Wilson: No, not right now. I’m writing two books and then I’ll be writing a play on the trial of William Penn who was the first rich man converted to Quakerism and he made so much trouble in England where Quakerism was illegal, that the King finally gave him a charter to establish a colony over here which became the state of Pennsylvania. But in England he was put on trial for preaching on the streets a religion contrary to the tenentes of the established Anglican Church. And he was guilty and the jury refused to convict him on the bases of the jury nullification I was talking about before. And so it went to the Tower of London for three months after which public opinion was so outraged that the judge reversed himself and admitted the jury had the right to nullify a law that they didn’t like. That was the beginning of the end for religious persecution in England.