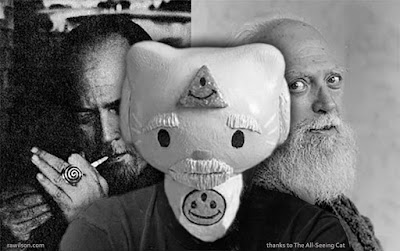 From the RAW Trust: "Everyone interprets Robert Anton Wilson in their own way."

Comic book panel on the 23 Enigma.

Five books about immortality. I like Philip Jose Farmer's Riverworld. Via Supergee, who just changed his password for his blog, and it's working out really swell.

Scott Horton on 2¾ Cheers for the New Quincy Institute. ("What if George Soros and Charles Koch teamed up to do a thing? Sounds pretty scary so far. What if the project was to build a new antiwar think tank in Washington with the financial backing to make a serious mark?") I'm following on Twitter and I've signed up on the email list.

"You don't always know which Orson Welles stories actually happened. But here, true or not, is the tale of the time he allegedly dined with Hitler."

"The White House garden had quite a different look during the Marianne Williamson presidency."