Toxteth Day of the Dead book 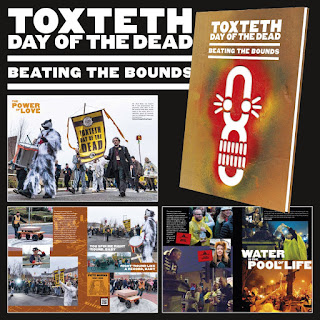 More British Discordian news: The Liverpool Arts Lab has announced the impending publication, on July 23, of the Toxteth Day of the Dead: Beating the Bounds book, with a foreword by the Justified Ancients of Mu Mu.

"The Justified Ancients of Mu Mu have set out to build The People’s Pyramid. The first brick was laid on its foundation stone on Toxteth Day Of The Dead, Friday 23 November 2018.

"The location of the pyramid had not yet been determined, and so the foundation stone was taken on a procession around part of the the Royal & Ancient Park of Toxteth, searching for its future permanent site ... This book commemorates that event with photos of the procession, stories, poems, games and gifts."