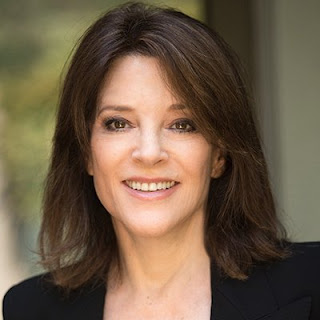 "One day maybe we'll awaken from this simulation and realize that Marianne Williamson's campaign was just a dream," writes Jesse Walker in his article about this year's most interesting and most weird presidential candidate. "But for now, she wants your vote."

Jesse is always interesting, but his piece on Williamson for Reason magazine is particularly good, and ties Williamson to a long tradition of American spirituality which Walker calls New Thought and could also be referred to as New Age, a recent manifestation.

Readers of this blog will be interested in passages such as this:

"That said, there is one rather Hallian passage in Williamson's first political book, 1997's The Healing of America. The Great Seal of the United States—that eye-in-the-pyramid logo on the back of the dollar bill—'illustrates our Founders' sense of America's destiny,' Williamson writes. 'The seal shows the Great Pyramid at Giza, with its missing capstone returned and illuminated. The Eye of Horus, the ancient Egyptian symbol for the consciousness of higher mind, is displayed within the capstone. Beneath the picture are written the words 'Novus Ordo Seclorum'—new order of the ages. This Masonic symbolism reveals democracy's function as a vehicle for the realization of humanity's highest potential'." ["Hallian" as in Manly P. Hall] 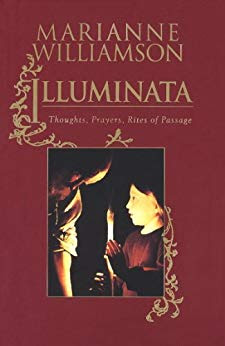 One of Ms. Williamson's books.

Gee Tom—I’m afraid I don’t follow the reference to Joshua Hallenbeck. What am I missing? Also—are you following @GaryLachman? Blondie bass player turned esoteric author. I particularly enjoyed Dark Star Rising, which may be where I first heard about Donald Trump and Norman Vincent Peale.

@Chas I'll follow Gary. Joshua is a very big RAW fan in Colorado who is pro Trump and is on Twitter and Facebook; he posts here sometimes. Say hello Joshua!