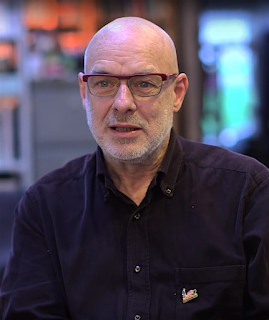 
"The totally convinced and the totally stupid have too much in common for the resemblance to be accidental." - Robert Anton Wilson #quote
— Brian Eno (@dark_shark) July 8, 2019

I particularly like Eno's work as a producer for Talking Heads, but he also produced recordings for U2 and many other bands, has issued memorable solo recordings, was an early member of Roxy Music, did a fine album with David Byrne called My Life in the Bush of Ghosts and has many other credits.