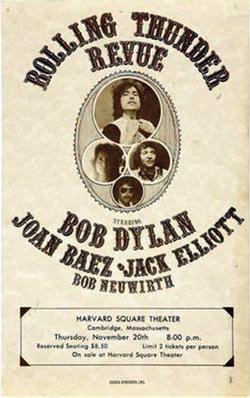 Oz Fritz has a post up on one of my favorite singers (and one of Robert Anton Wilson's least favorite), Bob Dylan. Specifically, the post about the new Martin Scorsese movie on Netflix, Rolling Thunder Revue: A Bob Dylan Story.  I haven't seen it yet; maybe this weekend. I am old enough that I saw the original movie about the tour, Renaldo and Clara.

If you haven't heard, the new movie mixes real documentary facts with fiction.  In other words, it's not a straight documentary of the tour, although it has concert footage and some genuine moments mixed in with the made up incidents and characters. Renaldo and Clara also was pretty weird and not really a conventional documentary; I remember mainly liking the concert sequences.

One paragraph from Oz's piece:

"This misdirection should come as no surprise.  The film begins with old footage of a stage illusionist making a woman disappear then bringing her back.  It seems part of the film's mission to ontologically shake-up assumptions about exactly what is going on.  Editing and using sound and visuals in this way to create new contexts and factual illusions reminds me strongly of Orson Welle's F is for Fake "documentary" that looked at art forgery through using the techniques of film forgery. Robert Anton Wilson wrote an excellent account of the sleight-of-hand in that film that could give some insight into how Scorsese constructed this Bob Dylan story."

Thanks for posting this, Tom. People here might also be interested in what I called the "Timothy Leary issue" It seemed like they created a context for Dylan to address the harsh criticism Leary directed his way in the '70s.

Thanks. Great article by Oz. I also highly recommend Richard F. Thomas’s Why Bob Dylan Matters. It gets pretty geeky but I found it really fascinating when he traced a lot of Dylan’s work back to the Latin classicists like Virgil, Horace and Ovid.