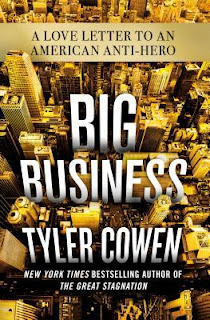 Trophy Kill, R.J. Norgard. Mystery novel set in Alaska. I read this for work because Norgard is a local author, but it's a quite well done first novel, the start of a series, with lots of Alaska lore and realistic information about the life of a private eye (the author was a private investigator in Alaska.) Four stars.

The Earth Will Shake, Robert Anton Wilson. I'm looking forward to the discussion group on The Widow's Son. Four stars.

Good Riddance, Elinor Lipman. Latest novel by writer who is known as kind of a modern version as Jane Austen. Enjoyed it, but not quite as much as some of her others (I follow her pretty religiously). Three stars.

An Insider's Guide to Robert Anton Wilson, Eric Wagner. This one was a re-read. Essential for the serious RAW fan. I particularly admire the essay on The Homing Pigeons and the Illuminatus! timeline. Four stars.

Big Business: A Love Letter to an American Anti-Hero, Tyler Cowen. One of Cowen's most contrarian books and one of his best, although I suspect many people have their minds made up and will refuse to read it. Good defense of the big tech companies. Not as one-sided as the title implies; there are good criticisms of business, too.  Four stars.

Thanks as always for the kind words. I just finished rereading In Search of Lost Time by Marcel Proust, probably my favorite book.

If you haven’t read it, I think Chronic City by Lethem is fantastic... more of a PKD vibe than RAW, but many themes relevant to this blog.

Thanks for the positive review of Trophy Kill. I am deep into the sequel, Road Kill. Love your blog!