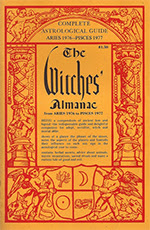 The Witches Almanac, the source for RAW's guided meditation.

Last year on this blog, I linked to a guided meditation that RAW wrote that Martin Wagner found and shared on his site.

Robert Anton Wilson advised, "The student should record the following on a tape and play it back several times, while in a relaxed and meditative state. There is no need to employ a yogic asana, unless you are already skilled at yoga and do these postures easily. Otherwise just be relaxed but alert, in an ordinary chair, in a room where you won’t be disturbed and let the tape run several times."

I've now gotten around to recording it, and I thought as a convenience for the rest of you, I would share the recording. Get it here.   It runs for six minutes and twenty seconds.

The music in the background is Rasa's band, Starseed; appropriate, I hope, for a guided meditation that sounds as if it were influenced by Timothy Leary, and used with permission from Rasa. The particular tune is "Lakshmi Smiles" from the Live in Mount Shasta album. Starseed's music is available on Spotify.

If anyone else wants to try recording it, I would appreciate a link to share.

UPDATE: Eric Wagner already has weighed in with his own recording, a faster paced 3:26 version. Get it here.