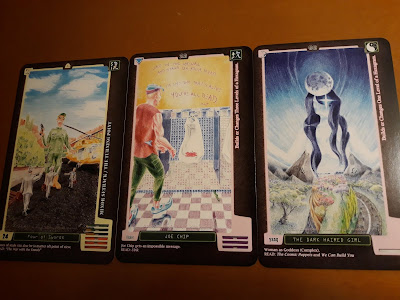 When I'm not trying to explain to my friend Ted Hand that RAW's libertarianism is a feature not a bug, we often chat on Twitter and elsewhere about RAW-related and cultural matters.

Ted has been offering Tarot readings for $10, using the new Philip K. Dick Tarot cards he helped create. My newspaper has just been sold to a new owner, Ogden Newspapers, so I'm going through a period of transition. In the mood for input and willing to experiment, I paid him for a reading. When I got the results, I realized that I'm currently reading the PKD section of Erik Davis' new High Weirdness book, a mild synchronicity.

Above are the three cards he drew, and here is his reading:

Here's your PKD Tarot reading. Cut off in the corner is the phrase "issues of scale can also be (a matter of) point of view," which is interesting given your situation with the paper being sold.

Indicator card is Joe Chip from Ubik, the quintessential PKD "small protagonist" who gets a sort of gnostic message from graffiti on the bathroom wall. That feels like some kind of a comment on your seeking out a Tarot reading!

Past card is Four of Swords, "The War with the Fnools." On the side of the cards is the I Ching correlation, interesting that it's minor setback. I'd take that as encouraging.

Future card is "The Dark Haired Girl" which is in traditional tarot the High Priestess, representing intuition or divine inspiration.

Joe Chip correlates with Hanged Man, which represents a situation of stuckness and/or self sacrifice. Can indicate something needs changing in your life or your approach.

Four of Swords in traditional Tarot is Truce.  Can indicate things having been brought to a resting point. Like once a problem has been solved.

There's some kind of weird allegory about "the changes in the media business" here. I'm also seeing some play on that in Joe Chip's "impossible message." Doing journalism is such a challenging task in this brave new world.

Dominance of Trumps in a reading indicate "forces beyond your control." So I'm seeing a pointer toward the goddess figure within, the Jungian anima.  There is an opportunity here to open yourself to some strange new ideas.

I guess my advice would be to keep seeking out ways to engage the "lunar consciousness" of weird intuition. Gaze at the moon, get high, find some spooky music. Dip into the irrational.

I’ve always loved that Ubik is “set“ in Des Moines, Iowa. And that it is based so much on the idea of already being dead, which, if you look at it very deeply, will always ultimately lead you to the realization that even if you aren’t dead now, you’re gonna be.