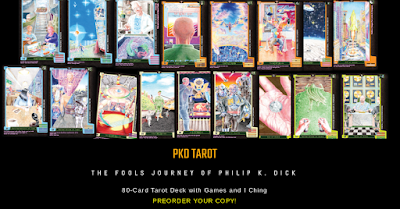 Unlock the Fool’s Journey and its relationship to the novels, characters, short fiction and other writings by Philip K. Dick. PKD scholar Ted Hand and tarot artist Christopher Wilkey have brought together a new vision of tarot and the great works of Philip K. Dick. It is an original concept of tarot that looks into both the past and the future at the same time.

Ideal for advanced students of tarot as well as novices to the I Ching (or Book of Changes), this 80 card tarot deck takes the seeker through an initiation into the life and writings of one of the greatest writers of recent times. Explore alternate realities and the nature of what it is to be human.

Taking cues from Aleister Crowley and other Golden Dawn inspired traditions, this deck puts forward some of the possible relations between tarot and the hexagrams of the I Ching, including two card games designed to help introduce readers to the symbols of which access that ancient volume.

Much more information here, including a link to preorder for $40. It's supposed to be available by August.

Ted also has begun offering three-card Tarot readings for $10, payable through venmo or PayPal, sent to Ted.Hand (at) gmail.com.