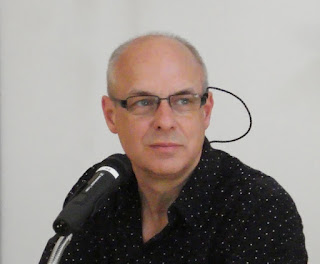 A footnote to Friday's blog post about the Thad McCracken piece published at Disinfo: One of the Twitter messages publicizing the article came from the account of Brian Eno.

I don't actually know if Brian Eno Tweets himself, or if he delegates the job, or if in fact the account is a fan's operation. Does anyone know?

But I'm intrigued that Eno might be a Robert Anton Wilson fan. Eno has long been one of my musical heroes.

Listing all the ways that Brian Peter George St John le Baptiste de la Salle Eno has intersected with my record collection and music listening habits over the years would require an impossibly long blog post, but here are examples: He played on the first two Roxy Music albums, he produced albums by the Talking Heads, he put out solo albums (many of which I purchased), he did a really good album in collaboration with David Byrne, he collaborated with David Bowie on the Berlin albums, he co-produced several U-2 albums ... and so on.

I would like to think that this blog offers a better guide to RAW's work than McCracken's piece. Hey, Brian! Over here!