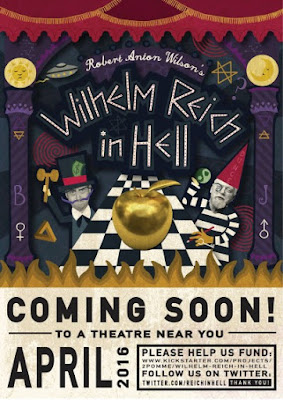 As I reported late last month, the Kickstarter campaign which aimed to stage a version of Robert Anton Wilson's Wilhelm Reich in Hell failed to meet its target. (If you don't meet the target on Kickstarter, the project fails and none of the contributors are charged any money.)

But 2 Pomme D'Or 3 Productions has sent out an email, vowing that "The show must go on," and announcing that efforts will continue.

"Now we did say the show would go on regardless and that is still true. We still have the Carriageworks theatre in Leeds booked. We are currently in the process if booking a couple more venues which we will release details of soon," it says.

The project has a website to provide details about the ongoing effort, and it offers some details on the planned production: "Originally written by Robert Anton Wilson and released in 1987. We have been given permission to put on a re-fangling of the original play this year. Commencing with 3 days – 21st to 23rd April – at the Carriageworks Theatre in Leeds, West Yorkshire."

A support page allows you to buy merchandise to support their efforts. If you pledged something to the Kickstarter, tell them the name you pledged under and you will get "something extra," the site promises.

Very glad they are pressing ahead!

I really like they promo art they've put up for it.

I'm a huge fan of Lance Bauscher's filmed version of the play, but it'll be cool to see a different take on the material.