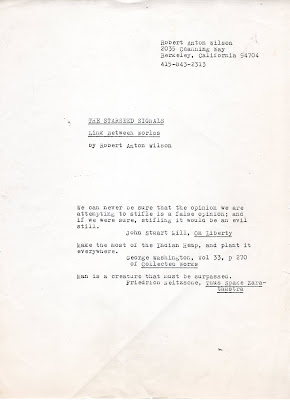 [This is some pretty interesting news, so I'm simply reprinting what Adam Gorightly posted on Facebook -- The Management].

Bouncing off the 8 Circuit Model post, I thought I’d mention one of the more mind blowing discoveries in the Discordian Archives, an unpublished RAW manuscript titled “Starseed Signals" that concerned RAW’s work with Leary in the early 70s on the eight circuits, space migration, life extension and that whole bit.

I’ve been working with the publisher of Historia Discordia (RVP Press) on the publication of Starseed Signals, which hopefully we’ll see some time soon. (I’m not holding my breath though, as this project's been in various stages of development for over 4 years now, so we’ll see!)

Starseed Signals (when and if you actually see it!) will include a foreword and afterword by yours truly, in addition to an unpublished interview tagged on to the end of the book (also discovered in the Discordian Archives) that RAW conducted with Leary (for Playboy) around this same period ('75-76.) This interview was ultimately rejected by the Playboy editorial staff (who included Bob Shea.) Shea assisted RAW in attempting to place the interview with Playboy, but from what I’ve been able to piece together, Playboy ultimately considered Leary old news by this point (the interview was started while he was still in prison, and then finished shortly after his release.) RAW, however, received a kill fee, so I guess it wasn’t a total loss, Hail Eris.
on January 08, 2016

Whoa, you're right...this is big news!It'd be a real thrill to have some new RAW material.

Just out of curiosity, what would prevent this from going forward? Seems like a pretty straightforward (albeit time consuming, I'm sure) process.

I think the delay is with the publisher, rather than Adam, but I really don't know what's up. Maybe Adam can weigh in.

Yes, it's in the publisher hands. I'll let everybody know more when I know more. Or if I hear any firm dates.

what FB page is this from?

There's a public group on Facebook called The Early Discordians, which is where I say the notice.