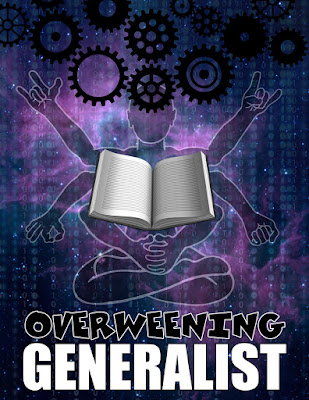 After a long silence, Michael Johnson is a prolific blogger again. He has a post on Robert Anton Wilson's "Jumping Jesus" thoughts, (with a hint at the end on on where his blog's name might come from) and a post "On Ethnomusicality and Universality in Music."

I exchanged emails a few days ago with Ted Gioia, the first contact I'd had with him in months, and then the next day I read Michael's post, which is largely about Ted Gioia. I liked the synchronicity, a topic Michael talks about.

Also, I liked this bit from Michael:

Scholars of reading like David Hall and Rolf Engelsing have confirmed and drawn out something I'd assumed: around 1750 or so, "intensive" reading - in which a reader reads a book or books over and over - gave way to our modern "extensive" way of reading a book, rather quickly, then moving on to the next thing. I know certain 20th century writers - Robert Frost comes to mind - were known for reading the same 20 books over and over. I think many of us do both types of reading.

I do both kinds of reading, too; I had never heard of intensive reading, although it makes sense in a age of much fewer titles. As I remarked the other day, I listened to a podcast in which Gordon White attacked James Joyce as the worst writer of the 20th century; maybe Gordon isn't into intensive reading?

Thanks for the nod, T-Jack!

The word "overweening" always seemed funny-odd to me, so I jammed it in there way back in 2011. RAW said something similar to me in 2003 about how difficult it was to keep up with everything new and interesting in his various fields of interest. He had not been keeping up with quantum mechanics but said he'd recently re-read that piece - IIRC it was by Bryce DeWitt - about whether the moon was there when he wasn't looking at it, and PhD in Physics DeWitt thought: I guess not.

I like Ted Gioia's writing and thinking and interests. His brother Dana is a prominent poetic presence in Sonoma County.

Very glad to see The OG back in the mix.

Yes, overweening. RAW. The Book of the Breast.
Maybe you should write The Book of Abreast?
Also, use OG in click-bait to lure brewery's yeast!

Great name. Great blog, for me, personally.
I believe it is great work for Michael. I love it.
Thank you for letting us suckle here. Tasty.

I love Gordon White. The hyperbole put-downs are as good as gold.
We all know what he is really saying.

Brewer's yeast, sorry, blaming iPad. Regardless, the alluded metaphor stands.
Homebrew is excellent in 2016 so far.