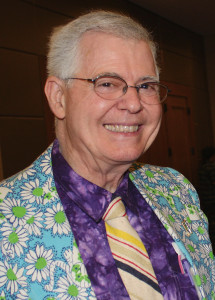 David G. Hartwell, who was known for his colorful neckties

My favorite science fiction book editor, David Hartwell, has died. I am not up to the task of explaining why he was a very important editor — there are many people who know more about his career — but please let me mention a few things.

As this blog has a particular interest, let me first cover our parochial connection. Hartwell was the editor of Pocket Books from 1978 to 1983. He was the editor for five of Robert Anton Wilson's most important books: Cosmic Trigger: The Final Secret of the Illuminati, Masks of the Illuminati, and the three Schroedinger's Cat books: The  Universe Next Door, The Trick Top Hat and The Homing Pigeons. You can read my 2010 interview with David Hartwell.  RAW and Philip K. Dick apparently met for the first time, or at least had their first serious conversation, in Hartwell's hotel room in California. (Part two of the interview is here.)

But as much as I obviously love Wilson's writings, it trivializes Hartwell's achievements to dwell on that too much. Hartwell was a hugely important science fiction book editor, who edited books by many of your favorite writers, and mine. Some of them: Robert Heinlein, Philip K. Dick, Philip Jose Farmer, Frank Herbert, Roger Zelazny, Charles Stross, Guy Gavriel Kay. I am leaving out the names of a great many other writers, although not intentionally. I have not been able to find a list anywhere of the books that he edited.

I suspect that Hartwell will largely be remembered as the editor for Gene Wolfe, much as Maxwell Perkins is remembered for being Thomas Wolfe and Ernest Hemingway's editor. Wolfe is often considered the best, or one of the best, living science fiction writers, and Hartwell edited nearly all of his books, including Wolfe's famous The Book of the New Sun series.

When I interviewed Gene Wolfe early last year, Hartwell supplied me with a quote about Wolfe's latest book, A Borrowed Man. I loved the book when I finally got around to finishing it last weekend, and in fact I sent a short email to Hartwell on Tuesday, telling him so. (He was an extremely busy man and he hardly knew who I was, but whenever I needed to write to him about something — for example, to ask a question about Robert Anton Wilson — I always got an answer.)

There are many story collections that Hartwell edited, including reprint books and a long running "Best SF" series. He also founded and for many years was the publisher of The New York Review of SF, to which I have occasionally contributed. He wrote an excellent book about science fiction called Age of Wonder.

When I went to science fiction conventions, I always made a point of listening closely to him and attending his panels. At one convention, I heard him offer advice on how to shop for novels. Take the book off the shelf, he said, and read the first page carefully. Then take another book off the shelf, and read the first page. Keep doing that until you find something worth buying and reading.

I am leaving a lot out. His death is of course terrible for his family and his friends, but it is also terrible news for the world of literature and for serious readers.

You can read the Wikipedia biography and the entry in the Science Fiction Encyclopedia. You can also look at his official website.  There's also the Locus Online obituary.

Hi Tom,
Thanks for your post on David Hartwell, and the links
to the interviews! A fairly complete list of the books
edited by Hartwell is here:
http://www.isfdb.org/cgi-bin/ea.cgi?1675
He was a mensch. That's about all I can say.
I'll miss seeing him in person at Boskone and Readercon,
and his hugely influential taste in SF and Fantasy.
It's a huge loss for us all...
lex