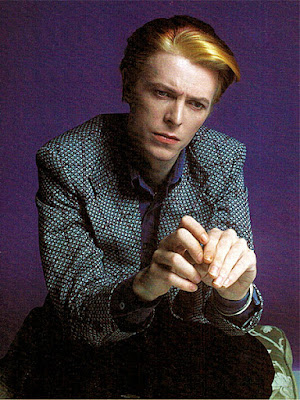 Bowie also appeared completely dialed in to the space migration, extra-terrestrial intelligence, Starseed Transmissions gestalt that RAW and Leary were promoting in the '70s. Staring with his first popular single, "Space Oddity," which under the right circumstances really does give the feeling of being way out in Space, then especially on the album "Ziggy Stardust and the Spiders from Mars." "Space Oddity" was released in the summer of 1969 to coincide with the launch of Apollo 11 while Ziggy Stardust was released in 1972 so it seems unlikely that Bowie picked up the E.T. Intelligence subject from RAW and Leary who were undergoing their own experiences around that time and had yet to publish their findings. I don't know how or where Bowie picked up on that meme. He could have, through his experiences with experimental theater and magick, gotten himself hardwired to the source — whatever transmission it was that gave RAW the impression he was in communication with some kind of Intelligence from the Sirius star system. Through his studies of Crowley, Bowie could have been in touch with the ideas put forth by Kenneth Grant who also had theories and inferences regarding extraterrestrials and Sirius. In 1975 Bowie filmed The "Man Who Fell To Earth" his first major role and he played an extraterrestrial. I felt there was much useful information, mood and atmosphere related to E.T. contact in there I remember leaving the theater elated to see the film end with an allusion to an occult symbol when Bowie tips his hat.

In 1983 Bowie hit town with his Serious Moonlight tour. One of my top concert experiences, he definitely fulfilled the role of cosmic prophet/musical hierophant, a disseminator of Higher Intelligence. Through the set design, costumes and, of course, the music he projected a vision of global awareness and peaceful, tolerant, cooperative, diversity. One of the props was a large blue beach ball of planet Earth that they bounced around playing like they were gods. Truly a genius.
on January 12, 2016

Eno/Roxy/Fripp/Belew/Bowie was always something Other in the way I perceived rock; my adolescence was consumed by swaggering metal guitar virtuosos. Bowie/Eno et.al injected whole other aesthetic level of theatricality, using the studio as an instrument (Eno), and taking in the history of pop music and reconstituting it.

I agree with Oz Fritz about Bowie and the feeling of "outer space." When the news came that he'd died I immediately picked up my guitar and strummed the Fmaj7--->Eminor chords that open "Space Oddity" and cried a bit. I LOVE that song. Genius!

So: I had friends in junior high who were sexually maturing more quickly than I was, and all the sudden they're consumed with Bowie, and I didn't "get" the theatricality/gender bending thing at all. I tried to get it, but I guess I was bewildered. Later I realized how important Bowie's high form of PLAY made a psychological difference for my friends who were 14 and stuck in conformist-crazed suburbia. They felt alienated and Bowie was saying it's okay. I get that now, and this aspect shouldn't be underestimated in Bowie's impact. Todd Haynes's film Velvet Goldmine gave a wonderful reading to this whole milieu.

Like Miles Davis and a few other artists, Bowie was one of those guys who kept coming up with new guitar players who really opened my eyes. He had an amazing flair for picking up the perfect guitar player for the ever-changing sounds he was going for. Every guitar player for Bowie knocked me out. I think I first became aware of Stevie Ray Vaughan via Bowie. Someone puts on the new record and it's "Let's Dance" or "China Doll" "Who the HELL is that guy? Holy shit!"

I guess the thing that makes Bowie a genius for me: constant changing and creativity and openness to novelty and staying true to his own vision. It's not just music, but fashion, provocation, imagination, vision, and knowledge. And he never seemed like a dick, no matter how large his star shined. He was funny, self-deprecating, witty, and even shy.

Thanks Tom for the promotion and the righteous plug!

Thank-you Michael for the comments. I agree about DB discovering great guitar players. Mick Ronson, Carlos Alomar, and Earl Slick were also quite excellent sidemen for him.

I'm going to expand these notes on my blog.

I’ve used [the cut-up method] only on a couple of actual songs, but I’ve used it—more than anything else—as igniting anything that might be in my imagination, and you can often come up with very interesting attitudes to look into…It seemed that it would predict things about the future and would tell me a lot about the past. It’s really quite an astonishing thing.

"Strickland — who admits he took Monday off work after hearing the news — first got into Bowie’s music as a teenager in high school, and he remembers picking up a copy of his “The Rise and Fall of Ziggy Stardust” album at Music World in the Avalon Mall. A budding songwriter at the time, the CD changed the way Strickland wrote music, as well as his onstage persona: he took to wearing more flamboyant stage outfits, he said, including gold suits and makeup."
http://www.thetelegram.com/News/Local/2016-01-11/article-4400716/Baby-Bowie/1

Bodhi alive or Bowie dead. Grind his grist to make our bed. Amen.
I will lie within it. Tell fibs about aliens and stuff. Sure.
(eat your peas, or Bowie will zap you from the sky)

It would be nice if you and Oz did an essay for us, Michael. Thanks for this.

On a lighter note (notice the 'troll' comments on the Baby Bowie story...

Here is a tribute to RAW, some apt quotes:

"The functions of the High Priest are twofold: one is to provide a common ground of Symbolism & Ideals around which communities can join together and identify themselves as communities. The other is to be a representative to the community of the Way of Truth- that which is contained in the Symbols and Ideals devised for a particular community. And this latter function is the test of a true High Priest. A fishing village will understand a different set of symbols than will the people living in a mountainside forest. But these different sets of symbols will contain the same message- the Way of Truth...It is the role of the High Priest to render ancient, eternal truths into symbolic forms which can be embraced by groups and communitites in a specific time & place, with particular needs and conditions. Thus, the community is given symbols with which they can identify, and with which they can find identity. However, the danger is obvious: contention arises abut the symbols, not their actual content."
- H. P. Lovercraft, Dunwich MA

It occurred to me last night that Bowie died of cancer, whose sigil is a 6&9, at 69 -- that's some mystical shit. There were references to "dark stars" in season 1 of True Detective; what's the significance of Bowie's album title, "Blackstar"? Love the blog, thanks