And here is a reminder of his continued relevance, sent to me by Dan. This is from Grant Morrison's Pax Americana comic book, published in November 2014 as part of his recent Multiversity series, and it features a character talking about the Timothy Leary-Robert Anton Wilson eight circuit model, in terms of color coding: 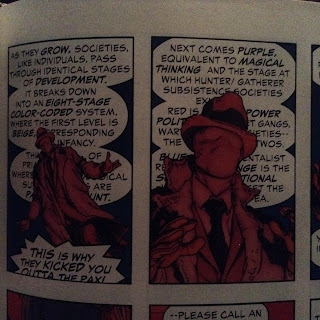 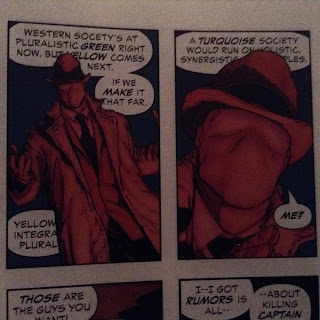 Dan explains, "I'm reading (comic writer) Grant Morrison's Multiversity right now, and I found a section in it, specifically the comic Pax Americana, where he uses RAW and Leary's Eight Circuit model and applies it to civilizational growth. It caught me off guard, even though I know that Morrison was influenced by RAW. Attached are the pictures of the panel in which the Question (Steve Ditko's Randian vigilante; Moore modeled Rorschach after this character in Watchmen) goes on the aforementioned monologue about the Eight-Circuit model."

I'm not a comics expert, but Morrison is of course the guy who did The Invisibles, which was influenced by RAW.

As a proponent of sequential art, this is about as good as it gets, and well worth the $3.99 for a digital copy at Comixology.

Also, even the exegesis on all of Morrison's recent work has been excellent, and Pax is no different:

Morrison here is actually drawing on a system called Spiral Dynamics, as popularized by Ken Wilber. You can google it for more info, including images of the color-coded tiers. I think the originator of Spiral Dynamics, Don Beck, might have come across the eight-circuit model, but it also draws on Gebser.