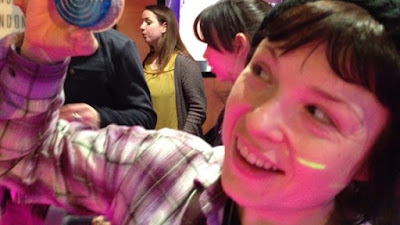 A new communique issued by Michelle Olley, PR and galleria curator for the Cosmic Trigger Play, reports on the doings of Daisy Eris Campbell and her group.

The main news is that plans are moving forward to stage the play in Santa Cruz, Calif., by July of next year:

So, on the weekend of Saturday January 23rd 2016, we will be gathering somewhere in NW London, to begin making good on our promise to get the play to Santa Cruz, USA, by July 23rd 2017, following a second UK run. We will do this by putting our heads together and getting to work on the practicalities, as well as coming up with ways to keep it Heroic/Magical/Capertastic.

More details at the link Sign up for future email news at the Cosmic Trigger Play website.

There's some nice bits about the play in the Rune Soup podcast.
on January 09, 2016