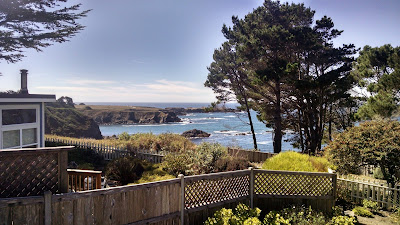 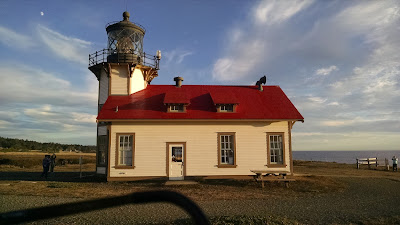 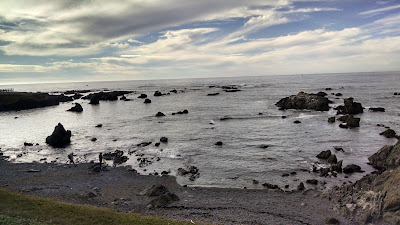 My wife and I like to take a vacation trip every year, typically in the late summer or early fall. Last year we rented a house in Mendocino, California. The top photo shows the view out of our back yard. This was one of my favorite trips, as I thought the area was particularly beautiful. We didn't bother to travel very far the entire time we were though, although we drove a short distance north to Fort Bragg, also in Mendocino County.

In one of those synchronicities that seem to keep popping up in my life lately, I discovered this week that Robert Anton Wilson used to live in Mendocino County. Of course, I knew he had lived in other areas of California.

The email newsletters from Hilaritas Press (sign up for them at the website) have been including stories from Christina Pearson about her dad. Here is the one from the newsletter that came out this week:

I have to say that there were so many events that Bob didn’t write about, that were often major players as our lives unfolded. Like at one point, we were living up in Mendocino County, on an old farm some ten miles north of Fort Bragg, California. We had no car, and there were no buses, so we just hitchhiked back and forth into town. For everything – from grocery shopping to buying thumbtacks to seeing a movie, our thumbs ruled. Arlen (our mom) was so NOT interested, she would say “Why don’t you go, Dear!” And Bob would go… hitch-hiking for milk, cigarettes, whatever! Because we hitched rides, one never knew how long it would take to make a “town run.” Sometimes you could be back in a couple hours, and sometimes, it took all day.

One day (after an all-day roadside excursion) he brought home a young couple who had given him a ride to the grocery store; after spending some time sharing and talking, they also gave him a ride all the way back to our old farmhouse, where he had invited them to stay a while! Turns out they were radically due to have a baby – which emerged shortly after stopping to stay with us. They moved on, we moved on, but it was wonderful when that child was born! There were so many extraordinary experiences. Some bad, some good, some boring, some outrageous; but all in all our lives were incredibly richly textured, which has made me into who I am today; I must say that I am grateful, as I like who I am today.

Bob really was very private, often not knowing who our neighbors were, yet out of the blue he might offer a helping hand to complete strangers like the couple above (who of course then became good friends…) Arlen always ran "good people interference” for him; she was really far more social than he was. Truthfully, he was not really interested in “getting know the neighborhood,” like she often was, but he totally adored small groups of friends (and pookahs) gathering around, chatting, brainstorming, getting stoned, watching movies, eating and sharing tales about life, love, the universe, whatever!
on January 29, 2016

What's up, well put together web page you have got there!
Buy Doxycycline Online