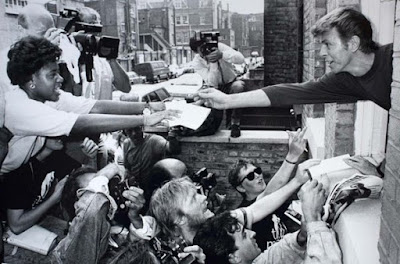 #DavidBowie signs autographs for fans from his front room window at his home in Brixton, 1980s. #oldlondon (Source)

So today I wake up, on the anniversary of Robert Anton Wilson's death, to learn that David Bowie has died.

Hard to think of another musician who mastered so many different styles. "Space Oddity" is the best song about going into space anyone has made; "Rebel Rebel" is the best hard rock song I ever heard; "Fame" was one of the best disco songs. No doubt many of you will have your own favorite songs. I was singing "Sound and Vision" to myself after I heard the news.

And the connection to Robert Anton Wilson is...?

I remember hearing Tim Leary call "Changes" the best song of the 1970's.

Eric has answered the question for me. Judging from Twitter, there's a lot of RAW fans out there who also loved Bowie.

In my mind, all of my posts are somehow related to RAW, but I realize that some have more of a direct connection than others!

Bowie also appeared completely dialed in to the space migration, extra-terrestrial intelligence, Starseed Transmissions gestalt that RAW and Leary were promoting in the '70s. Staring with his first popular single, "Space Oddity", which under the right circumstances really does give the feeling of being way out in Space, then especially on the album "Ziggy Stardust and the Spiders from Mars." "Space Oddity" was released in the summer of 1969 to coincide with the launch of Apollo 11 while Ziggy Stardust was released in 1972 so it seems unlikely that Bowie picked up the E.T. Intelligence subject from RAW and Leary who were undergoing their own experiences around that time and had yet to publish their findings. I don't know how or where Bowie picked up on that meme. He could have, through his experiences with experimental theater and magick, gotten himself hardwired to the source - whatever transmission it was that gave RAW the impression he was in communication with some kind of Intelligence from the Sirius star system. Through his studies of Crowley, Bowie could have been in touch with the ideas put forth by Kenneth Grant who also had theories and inferences regarding extraterrestrials and Sirius. In 1975 Bowie filmed The "Man Who Fell To Earth" his first major role and he played an extraterrestrial. I felt there was much useful information, mood and atmosphere related to E.T. contact in there I remember leaving the theater elated to see the film end with an allusion to an occult symbol when Bowie tips his hat.

In 1983 Bowie hit town with his Serious Moonlight tour. One of my top concert experiences, he definitely fulfilled the role of cosmic prophet/musical hierophant, a disseminator of Higher Intelligence. Through the set design, costumes and, of course, the music he projected a vision of global awareness and peaceful, tolerant, cooperative, diversity. One of the props was a large blue beach ball of planet Earth that they bounced around playing like they were gods. Truly a genius.

I have a guitar app that gives a tab of the day. Starman was the January 8th offering. I played it over Bluetooth as a midi in my child's little amp karaoke bluetoothy. That led to listening to The Passenger, as a midi. My wife though it was The Guess Who, in the intro on Starman, rhythm guitar strum-alikealicka a mind trick. We guess Guess Who a lot when we don't know, though.
The next day, he is pronounced dead on the news.
That led to an experience while playing starman on a custom made guitar.
(lie: Made to pickup subtle natural fields. These Eyes came through from K-ROCK when I turned Eastward.)
I had fun.
No aliens. I respect Crowley as a human being. If he hid a bad side...what?
Still, he gave us a great deck.
Anyway,
He was no angel,
. Bowie is a saint now. Starseed meme is pretty old. but juicy.
Oz nice post thanks.
We recognized him at work at crew change.
Bowie rocked, like Wilson wrote, and he was fun.
Hilaritas.
They put themselves out there. Got to give them that.
Good show.

Also Phil Dick became obsessed with the film "The Man Who Fell to Earth" starring David Bowie, seeing it over and over again. This played a role in VALIS.