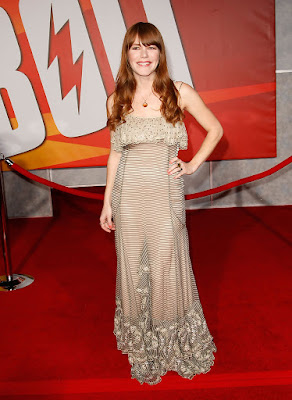 So, a few days ago I checked out an album called More Adventurous by a band named Rilo Kiley. Not sure why the band popped in my head and why I checked it out on Hoopla; I had heard one of their songs in a coffee shop years ago and always meant to listen to them more closely. I enjoyed the album and when I looked them up on the Internet, I noticed that the woman whose distinctive vocals give the band much of its sound is named Jennifer "Jenny" Lewis.

My wife and I like to watch British murder mysteries, so yesterday we watched an Inspector Banks episode called "Strange Affair." The murder victim found shot to death in the opening scene is a character named Jennifer Lewis.

Lately, I keep running into this stuff and I don't know what it means. About a couple of weeks ago, I wrote to Ted Gioia, the critic and author. It was the first time in months I had had occasion to email him (I was trying to get him interested in the latest John Higgs book, Stranger Than We Can Imagine).

Then I got around to reading the latest Michael Johnson blog post, and discovered it was largely about Ted Gioia.

Gioia is a big deal jazz writer (I read his book on jazz a few  years ago) and I told Gioia that I'd thought of him when I heard a nice tribute to the late Paul Bley on NPR. Gioia wrote back on Jan. 6, "I wish I had time to write a Paul Bley tribute, but The Daily Beast told me they wanted an article on David Bowie's new album instead. So I've been working on that.  But Bley is a personal hero, and I spent lots of time studying his music during my formative years." Then on Jan. 10 Gioia's piece became very topical when we all heard that David Bowie had died.

I suppose all of this is "just a coincidence," but it's interesting that it keeps happening.