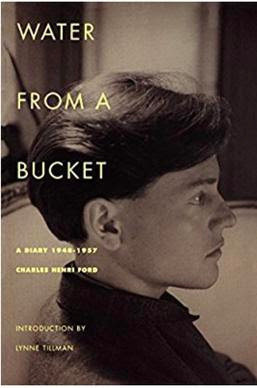 Cover of one of Charles Henri Ford's books.

As you can probably tell, I have a soft spot for writers who seem great but who have not, in my opinion, found the audience that they deserve.

One of the writers I like, besides Robert Anton Wilson, is Charles Henri Ford, a now-obscure (probably always pretty obscure) writer who was in Paris after World War I and spent the 1960s associated with Andy Warhol's circle in New  York City. I like Ford primarily for his surrealist verse of the 1930s and 1940s, anthologized in the collection Flag of Ecstasy: Selected Poems. And as you might guess from the fact that we're about to begin an online reading group for Vladimir Nabokov, I'm a longtime fan of Nabokov, although you can hardly say Nabokov is a neglected writer.

Reading The Secret History of Vladimir Nabokov by Andrea Pitzer, I realized that although Ford is not mentioned in the text, it seems likely that Nabokov and Ford had met, or at least been in the same room on occasion. Pavel Tchelitchew, a Russian surrealist painter, was the longtime companion of Charles Henri Ford. He also was the Paris roommate of Sergei Nabokov, Vladimir Nabokov's brother. Tchelitchew also was a friend of Edmund Wilson, Nabokov's friend, and may have seen Tchelitchew when Tchelitchew visited Wilson.

I don't know how many of my favorite writers Robert Anton Wilson knew. I do know from RAWilsonfans.org that Wilson and science fiction writer Philip Jose Farmer knew each other, or at least liked each other's work.  I enjoy Alan Watts, and he and Wilson were friends, something Daisy Campbell depicts in her Cosmic Trigger play.

Did Robert Anton Wilson ever meet Vladimir Nabokov, or have any connection to him? When I though about this, I did come up with one possible connection: Playboy magazine, where Wilson worked from 1965 to 1971.  Nabokov was interviewed by Playboy in 1964 and his writing often appeared in the magazine, so it seems like that both RAW and Nabokov both knew one of Playboy's editors.

I know that RAW was interested in surrealism, but if he ever read Ford, that would be news to me.
on January 07, 2018