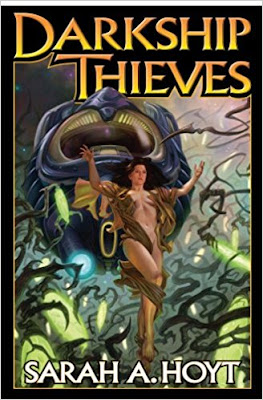 Sarah A. Hoyt is a prolific American author of popular fiction in a variety of genres in one of her second languages, English. (She was born in Portugal but now lives in Colorado.) She is a big Robert Heinlein fan and won the Prometheus Award in 2011 for Darkship Thieves, pictured above. (When I brought a copy to my book club meeting, the other members were amused by the cover depicting the heroine, apparently nude, in space. As far as I could tell reading the book, the protagonist, Athena Hera Sinistra, prefers to wear spacesuits and clothing when exiting a spacecraft, but that's SF art for you.)

A.H. Sinistra is back in action in Darkship Revenge, the fifth book of the series, which came out last year with a cover depicting a fully clothed, apparently male character on the cover. (The PC crowd ruins everything, or Hoyt has become a mature, respected artist. Take your pick!) In the first chapter, Athena gives birth while her spaceship is being attacked (Ms. Hoyt likes to begin things in medias res) and she has to come up with a name for the baby when she's busy with various problems, like finding her suddenly kidnapped husband. The choice surprised me:

There was really only one name for her. "It's alright Eris," I said, though she was probably asleep. "We're going to go to Earth and get Daddy back." (Page 20).

Now, Hoyt could have gotten the name from a variety of sources since Eris is a dwarf planet and SF writers usually pay attention to astronomy, but this passage after a scientist hears the name Eris is suggestive:

Of course it's possible Hoyd simply knows that "Discordia" was the Roman form of the Greek god Eris, so it's possible no reference to Discordianism is intended. I'm still reading the book and if I notice anything else, I'll update this post.

UPDATE: Sarah Hoyt says in an email that she has a classical mythology background. "Mostly Roman myth and Greek myth.  It's baked in my bones, as dad read me Roman poetry as a baby. 😉"

About the cover, Hoyt says, "On the cover, btw, covers aren't meant to be literal pictures of the book, and Athena does METAPHORICALLY step out naked, leaving all her assumptions behind."