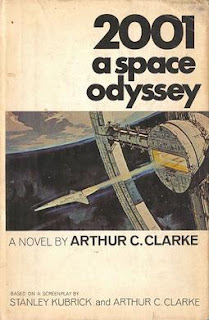 Cover for the first American edition of the novelization of the "2001" movie. (Via Wikipedia).

Austrian RAW scholar Martin Wagner has tracked down and published two RAW pieces in the English section of his German-language RAW site.

The first is "2001 The Secret Doctrine Revealed," as written by "Simon Moon" and published in July 1968 in Chicago Seed. It's a trippy, ecstatic reaction to the movie.

The second is "The Permanent Universal Rent Strike," published in 1971, and it's an explanation how how to get to anarchism. "The permanent universal rent strike – which is, together with the permanent universal tax strike and the coining of non-governmental money, the triple solution to everything – rests on a firm foundation in chaotic egotism."