Still more on the reputed 'lost' RAW book about Crowley 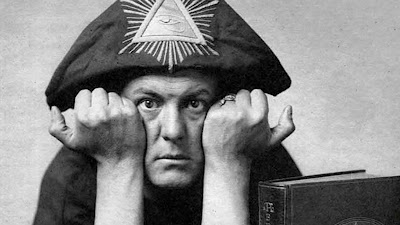 If you tuned in recently, you may have noticed my recent blog post about references in RAW's letters to a book about Aleister Crowley that he apparently finished and was apparently about to publish in the 1970s, although in fact it never appeared.

In the comments, Van Scott adds, "Way back when I first discovered RAW I went to the library and looked him up in a massive volume that I believe was called “Books in Print. “ I showed that he had published a book called “Do What though Wilt.” I don’t remember what year that was. Also, RAW mentions the Crowley book somewhere in Cosmic Trigger I."

And Adam Gorightly, also in the comments, writes:

"In my files I have a print out of a long Crowley article by RAW, which I believe I downloaded from the old RAW Fans website when Joe Matheny was running it. I don't think the article is online anymore, although I haven't looked recently. It probably could be considered a short book, I guess.

"I'd have to pull it out to tell you exactly, but I think it was around 40-50 pages and was some of the same material that appeared in an article RAW wrote on Crowley for The Realist, although I think this printout contains more material than was in The Realist article. Not certain, though, it would take a little research to figure that out.

"The Revisionist Press is an interesting connection because Revisionist Press published a very rare hard copy edition of Principia Discordia in or around 1976, and it now seems pretty clear that it was RAW who arranged this publication. This makes sense because during that period RAW was holding on to The Discordian Archives for Greg Hill, and so RAW would have had the original copies of PD that could be used for duplication. According to letters I've seen between RAW and Hill, RAW had the Discordian Archives in his possession between the years '74-'75."

I did a quick look and did not see a long article about Crowley in the essays section at RAWilsonfans.org, although I did find this article on The Law Is For All, originally published in Gnostica and reprinted online at this blog. Finally, Jesse Walker, in the comments in the recent post, helpfully points to the article about Crowley in The Realist, published in 1971.

What to make of all this? I wrote to Richard Rasa, co-publisher of Hilaritas Press and essentially the "CEO" of the RAW Trust's enterprises. (Christina Pearson, executor of the estate, is in my analogy the "chairman of the board.") Here is Rasa's reply:

RAW did a poor job of archiving his papers, so I don't know how much is available.

I’m cc’ing Christina, but I don’t think any more RAW writings exist in his papers, aside from letters, but I don’t really know.

I’m also not sure of the ownership status of what Adam might have. A 40-50 page article would certainly be interesting to see, and probably of interest to the Crowley community especially.

Sorry I don’t know anything further.

Perhaps there are enough Crowley writings in RAW's uncollected articles and interviews to put together a book, with editing and commentary from an expert such as Oz Fritz. By coincidence, Oz has just posted a new article at his blog, on the occult transmissions of the French philosopher Gilles Deleuze.  and if you read the post and others, you can see Oz's familiarity with Crowley's work.
on January 14, 2018

I would love to help with such a book.

I recall hearing on a talk tape RAW being asked about writing a bio on Crowley. He answered that there wasn't a good one out there and that who ever did it would need to invest a lot of time in the effort. He seemed to indicate that he didn't have that kind of time. This was before excellent bios on Crowley came out by Sutin, Kaczynski, and Churton.

Thanks for pointing to my new blog. I have a link in it back to the excellent Illuminatus! discussions we had here.

Do What Thou Wilt! is an essay by RAW and appeared in the September '73 issue of Gnostica News.

The talk Oz Fritz mentions is Robert Anton Wilson on Aleister Crowley from 1988.

I REALLY think RAW's Collected Writings On Crowley, edited by Oz Fritz, is a great idea.

Let me know how I can help! I think this needs to be done. I think the RAW/Crowley community actually needs something like this. RAW of course wrote -

-an 8-page Introduction to Regardie's _The Eye In The Triangle_

- a 4-page article "Crowley, Leary and Genetics" from 1974, which cites as part of the endnotes this: ""This article is abstracted from _Lion of Light_, a forthcoming study of Aleister Crowley and modern science."

-a 6-page piece from an obscure (to me) magazine called Oriflamme (1971?) that seems to begin with a big Table of Correspondence between Crowley's Hermit, Lover and Man of Earth to cognate items in Gurdjieff, Leary's 8CB, Cabala, and "Other," incl Dhyana, Freud and Eric Berne's terminologies.

-probably between 35-80 significant passages in letters to editors, introductions to other authors' books, other articles and in interviews where RAW writes or says something substantive about Crowley. EX: There's an old article or letter from Green Egg in which RAW proffers that Victoria Woodhull, "in many ways, she anticipated not only Blavatsky but Crowley..."

Also: RAW's slight esotericism in his immortal books: he will infuse his writings with Crowley-influenced items w/o mentioning The Beast.

I'm fairly certain there's enough from RAW on Crowley and magick, history of occult, Crowley as possible double agent, etc...for Hilaritas to put out a substantive book. Especially if Oz Fritz gets to comment/curate/arrange, etc.

A project like this, done well, seems to me the next best thing to having Lion of Light.

I also think it would be a great idea! Maybe if enough people show some support for this idea it could become a “reality “.Maybe.

I meant to add that when I interviewed RAW in 2001, we were discussing Crowley and I mentioned something to the effect that I wish he would have written a book on Crolwey and at the time he told me, "Well, maybe I will."

If there’s interest in putting together a RAW Crowley book, I have a kinda sorta RAW/Crowley file. A half dozen or so articles. Also an audio interview of RAW on Crowley I’ve heard would fit into a project like this. RAW also wrote a few things on Jack Parsons which would make sense combining with the Crowley stuff.

I found the longish article I was referring to, it was once upon a time online at:
http://www.maybelogic.net/fraterperdurabo

It is roughly 35 pages and partly the article that appeared in The Realist called “The Great Beast Crowley.” But as I thought, there seems to be more here in this print out article I have than was in The Realist article. Unless The Realist did a part 2 of the article. At least that’s what it appears like taking a quick glance.

It appears this longish Crowley article was used in one of the maybelogic online classes called Crowley 101, which no doubt the Maybe Logic crew would know more about.

I took the Crowley 101 class and don't recall a 35 page article on Crowley posted there. I could have missed it, I guess.

Thank-you all for the encouragement regarding a possible book. I learned a lot about magick from RAW, he was my first teacher on that subject.

The article might have been recommended reading and not part of the required reading....maybe.