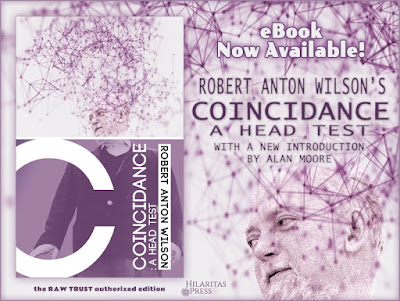 The ebook of the new Hilaritas Press edition of Coincidance has been published. The new print edition is expected to soon follow.

This new edition is particularly generous with extras. It features a new introduction by Alan Moore, and also a very long unpublished interview with Robert Anton Wilson.

"John van der Does traveled from France to Ireland to interview Bob. His intention was to translate the interview into French, but only some 20% of the interview was ever published, and the entire original English version has never been published before now," Rasa writes in the newsletter announcing the publication.

Rasa decided to run the entire interview, which features an Afterward by Mike Gathers.

I know that Rasa worked very hard on the graphics for this new edition, and I think RAW fans will be pleased.
on January 03, 2018