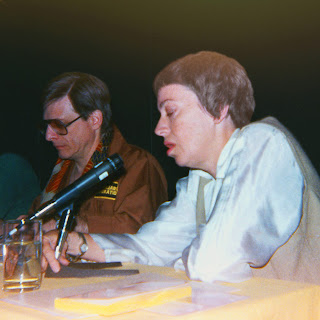 Author Ursula K. LeGuin, who wrote science fiction and fantasy and also mainstream fiction and poetry, has died at age 88.  Here is the article in her hometown paper in Oregon.  I particularly liked her classic novel The Left Hand of Darkness, which I've read more than once, and her short fiction. Other folks would likely mention The Dispossessed, The Lathe of Heaven or the Earthsea books.

There is in fact a Robert Anton Wilson connection. In his 1976 interview with New Libertarian Notes, when he was asked about prominent science fiction writers, he said, "LeGuin is great already, and getting better book by book."

LeGuin won the Prometheus Hall of Fame Award in 1993 for The Dispossessed. I have been told that Robert Shea was one of the members of the Libertarian Futurist Society who campaigned for it to win.
on January 24, 2018

Late to the game as usual, I just recently read The Left Hand of Darkness. I think the Kindle edition is only $2.99 or something. Good book.