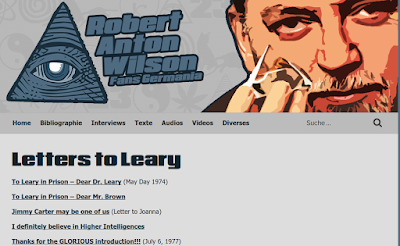 Start the new year off right by reading the Robert Anton Wilson letters to Timothy Leary that Austrian RAW scholar Martin Wagner has posted to his new website.

In a letter dated May Day 1974, noted as the "198th anniversary of the founding of the Illuminati," RAW gives the full original title of Illuminatus! as llluminatus! or Laughing Buddha Jesus Phallus Productions Presents or Swift-Kick Inc. or Telemachus Sneezed or The Untidy Ape: A Head Test.

The same letter also has a good restatement of the SNAFU principle:

"The SNAFU Principle holds that 1. Communication is only possible between equals. 2. In any relationship based on inequality, miscommunication steadily exceeds communication. 3 Progressive disorientation of all parties then results. (This is the cybernetic foundation of libertarian politics.)
You will readily see how the Bateson-Szasz communlcatlon-Jam theory of "mental illness" fits in here; most eccentricities are attempts to communicate outside the authoritarian game those messages which are taboo within the game."

Something for you Eight Circuit fans, from the undated "I believe in Higher Intelligence" letter: "A major discovery: Kazansakis's modern sequel to the Odyssey has the closest correlation with the first seven circuits of any book I've ever read, mystic or scientific."

There are also references to a mysterious "introduction to Crowley" book that RAW completed and thought was going to be published, and to Devil's Masquerade, apparently the original title of Masks of the Illuminati.

You'll make your own discoveries, based upon your own interests.

UPDATE: Martin says his source was this area of the Internet archive.

Thanks for sharing this and all the other recent mentions, Tom!

I can’t resist pointing out that in the Masks of the Illuminati discussion, I conjectured that the original title was The Devil’s Masquerade.